We use cookies to provide you with a better experience. By continuing to browse the site you are agreeing to our use of cookies in accordance with our Cookie Policy.
Home » Brands see big potential in ‘nighttime nutrition’

KANSAS CITY — Late-night snacks may be due for a healthy makeover.

A small but growing number of products designed for pre-bedtime snacking are entering the market. They are described as healthier than traditional late-night fare and carry the added benefit of promoting sleep and relaxation.

Nightfood, Inc., Tarrytown, N.Y., launched a “sleep friendly” ice cream line last year. Available in a variety of flavors such as Full Moon Vanilla, Midnight Chocolate and Cherry Eclipse, the products contain more fiber and protein and fewer calories than traditional ice cream. Nightfood ice cream contains magnesium and glycine, which promotes relaxation, while ingredients that may disrupt sleep, such as excess sugar, fat and caffeine, are reduced or eliminated.

“Just being delicious isn’t enough these days,” said Sean Folkson, chief executive officer at Nightfood. “Neither is just being different. You need to be different, but in a way that actually matters to the consumer.”

Other companies, including Nestle-backed Goodnight and Milwaukee-based Good Source Foods, also are getting into the late-night, sleep-friendly sweets game.

“(Goodnight) is confirming our beliefs that people are looking for a natural remedy for something they normally take in supplement form such as melatonin,” said Doug Munk, director of new business ventures for Nestle USA. “We are also finding people are looking to replace some of their junk foods before they go to sleep with something that is a little better.”

Good Source Foods uses dried cherries, which contain melatonin, and lavender, which is known for its calming effects, to make its Evening Calm variety of chocolate clusters. Designed to promote sleep and relaxation, the chocolates also contain turmeric, honey, oats and walnuts.

Nightfood, Goodnight and Good Source Foods are some of the handful of brands tapping into nighttime nutrition, which Mintel called “one of the most compelling and category changing trends” in its annual Food and Drink Trends report. More than 80% of consumers snack regularly before bed, Mintel said. 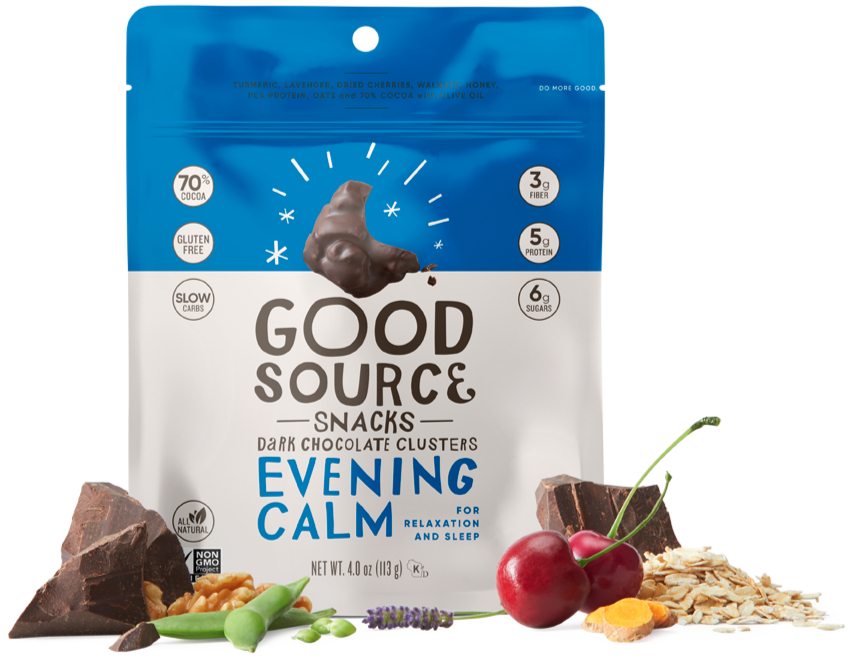 There may be a biological component driving consumers to the kitchen at night. Appetite tends to peak in the evening, when cravings for sweet and salty foods are strongest. Willpower weakens throughout the day, so the later it gets, the easier it is to reach for the cookie jar or bag of candy.

At the same time, interest in better-for-you snacks is at an all-time high. As many as 80% of consumers seek healthier snacks that pack an added functional benefit.

“Scientific research over the last several years has helped us more clearly understand why people snack the way they do at night,” said Michael Grandner, director of the Sleep and Health Research Program at the University of Arizona and adviser to Nightfood. “It seems we’re biologically hard-wired to default to sweets, salts and fats as it gets later in the day.”

This may explain why more than 50% of consumers report dissatisfaction with their own night snacking behavior, despite spending an estimated $1 billion per week on snacks consumed between dinner and bed.

“More than half of that money … is being spent in a dissatisfied way, by people that want something better,” Mr. Folkson said. “That speaks to not only the size of the opportunity, but the immediacy and the motivation on behalf of the consumer, which is really powerful stuff.”