We use cookies to provide you with a better experience. By continuing to browse the site you are agreeing to our use of cookies in accordance with our Cookie Policy.
Home » IFT20: Potatoes offer untapped product development possibilities

KANSAS CITY — Product developers are discovering new possibilities for potatoes, including in performance nutrition and baked food applications. Savory toaster pastries and sports drinks were among concepts discussed during a webinar held as part of ShIFT20, a virtual event produced by the Institute of Food Technologists, Chicago. Its annual meeting and exposition was canceled due to COVID-19.

“The benefits of formulating with potato products are pretty much endless,” said RJ Harvey, executive chef and director of culinary for Potatoes USA, Denver. “They can be used to extend shelf-life, especially when we’re talking about dehydrated potatoes. They can be used to improve texture and flavor in various baked goods, as well as enhancing the browning or coloring of those various baked goods.

“Obviously they make a great gluten-free option, particularly in breadings and coatings, but also using them within various baked goods that would normally have gluten as an ingredient.”

He offered an example of flourless brownies formulated with purple potatoes, almond and cashew butter, eggs, honey and cocoa powder.

Potatoes may be blended with chickpeas and spices to create a simple plant-based patty that is free of eggs, soy and gluten. Tomato paste is added as a binder.

“There are so many meat analogs that have hit the market as of late,” Mr. Harvey said. “If you’re looking for a clean label, something that’s very simplistic with wholesome ingredients, you can really look toward potatoes as a solution for any type of veggie burger.” 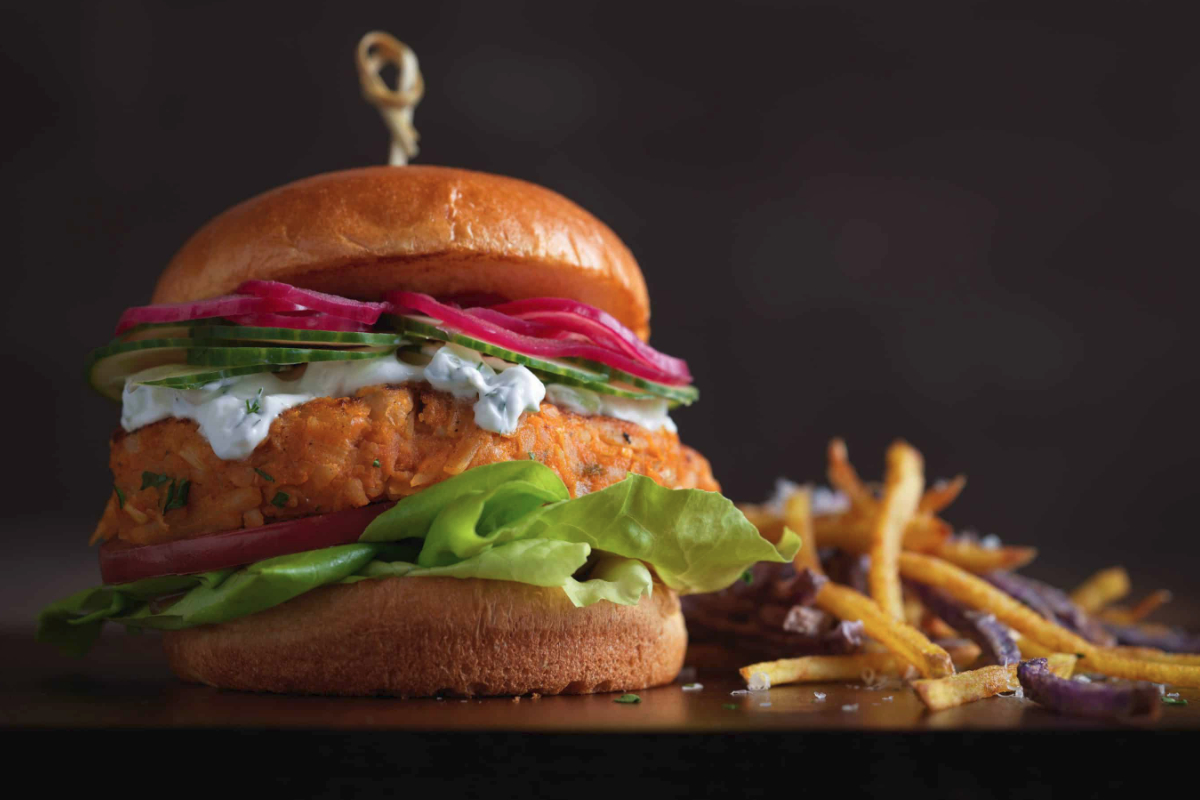 “Here we have a clean label alternative that has natural potassium,” he said. “Where most sports drinks focus on the sodium to provide electrolytes, this is more nutrient-dense in the potassium realm than in the sodium realm.”

An electrolyte gel based on potatoes has a neutral flavor and may be used in sweet, savory or tart applications. The viscosity may be adjusted to suit any preference “so it’s not something that’s too cloying or too thick,” Mr. Harvey said.

The potato’s nutritional profile may contribute positively to athletic performance. A medium 5.3-oz skin-on potato provides more potassium than a banana, plus 2 grams of fiber and 3 grams of protein, Mr. Harvey said.

Nicholas Burd, PhD, associate professor of kinesiology at the University of Illinois in Urbana-Champaign, presented research findings from a clinical trial examining the effect of potato consumption during a cycling challenge.

Sports gels and bars generally contain a combination of glucose and fructose, which in large volumes may trigger gastrointestinal distress in athletes, Dr. Burd said. Other drawbacks to using such products include cost, excess packaging waste and flavor fatigue, he said.

“Potatoes are intriguing because they provide a valuable supply of carbohydrates, are naturally rich in electrolytes, and also they are a cost-effective strategy.” — Nicholas Burd, PhD, University of Illinois

“Finding an alternative race nutrition strategy is beneficial,” he said. “Potatoes are intriguing because they provide a valuable supply of carbohydrates, are naturally rich in electrolytes, and also they are a cost-effective strategy.”

In Dr. Burd’s study, which involved 12 trained cyclists between the ages of 20 to 50 years old, potatoes were found to be as effective as commercially available sports gels to support prolonged cycling performance. The subjects consumed either baked, peeled and pureed russet potatoes, sports gels or water during a two-hour cycling challenge and subsequent time trial performance.

“We have scientific evidence to show that potatoes are a feasible race fueling strategy to use, at least to support cycling performance,” Dr. Burd said. “You can base that on the fact that blood glucose and gastric emptying rates are similar between the potatoes and commercial sports gels.”

Those considering experimenting with potatoes during an endurance event should incorporate them in regular training, he cautioned.

“If you’re going to use any fueling strategy, whether it’s potatoes or sports gels, make sure you’re using them in your daily training,” Dr. Burd said. “You need to train how you’re going to compete.”