We use cookies to provide you with a better experience. By continuing to browse the site you are agreeing to our use of cookies in accordance with our Cookie Policy.
Home » Honey is more than a sweetener

Honey is more than a sweetener

CHICAGO – Sugar’s negative image due to its impact on rising diabetes rates and childhood obesity has hurt sales of all types of sugary foods and beverages. Nearly four out of five consumers say they are trying to limit or avoid sugars in the diet, according to the International Food Information Council Foundation’s 2020 Food & Health Survey.

People who want to reduce their sugar intake typically do not want sugar-free products but instead those with less sugar or those sweetened with natural, non-sugar ingredients, according to market research firm Packaged Facts, Rockville, Md. New product activity has surged for reduced-sugar foods and beverages, with manufacturers turning to ingredients such as stevia, monk fruit, fruit and honey.

“Honey is so much more than a sweetener,” said Keith Seiz, spokesperson for the National Honey Board, Longmont, Colo., during an online media event this past week.

Spokesperson Alison Conklin explained that food and beverage manufacturers are using honey quite often in new product innovation. It’s not just because honey provides a distinct flavor and sweetness, or that it is recognized as an unprocessed ingredient that is highly functional.

“Honey’s advantage as a sweetener is its marketability,” Mr. Seiz said. “It’s the bee to bottle story. Honey complements today’s clean label formulating trend. Marketers are bringing honey to the front of the package to clearly communicate to consumers its inclusion in a packaged food.”

“Honey is so much more than a sweetener.”
– Keith Seiz, the National Honey Board

Beer is the No. 1 application of honey, followed by bread/doughs, packaged cold beverages and then ready-to-eat and hot cereal, according to research conducted by the National Honey Board. Liquor/distilled spirits comes in fifth, with deli/luncheon meats sixth, followed by granola/snack/nutrition bars. Cookies, dairy/yogurt and condiments, including salad dressings and sauces, also are experiencing an increase in use of honey as a sweetener.

To meet demand, the United States imports about two-thirds of this honey, with the majority of suppliers based in Argentina, Brazil, India, Ukraine and Vietnam. The top honey-producing states are California, Florida, Montana, North Dakota and South Dakota.

Mr. Seiz emphasized honey is honey regardless of who or what country supplies the product.

“Honey is a pure product that does not allow for the addition of any other substance,” he said. “Codex Alimentarius is very explicit and states ‘honey sold as such shall not have added to it any food ingredient, including food additives, nor shall any other additions be made other than honey.’”

This is not to say that all honey is created equal. The colors of honey form a continuous range from water white to dark amber. Light-colored honey typically has a mild flavor, while a darker color is more intense. 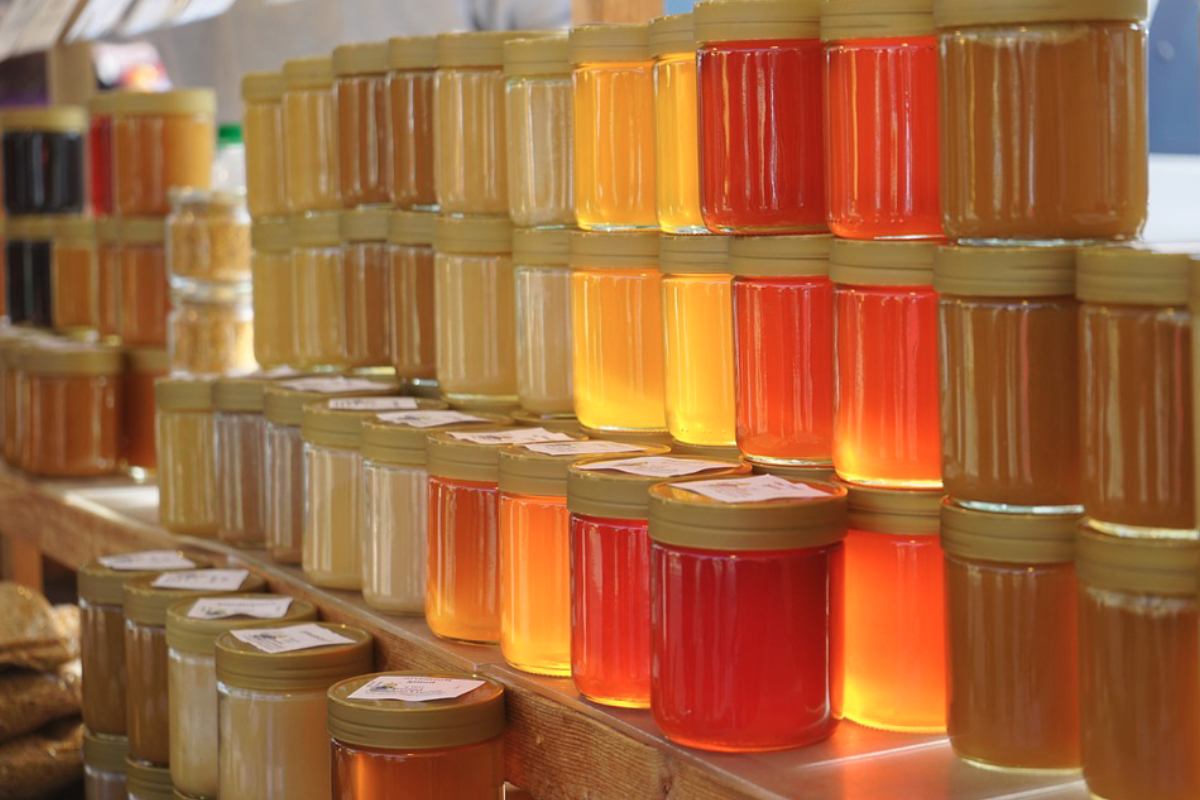 “Honey has thousands of varietals, all dependent on where the bees forage for nectar,” Mr. Seiz said.

Honey is about 17% water, 82% sugar and 1% acids, minerals, vitamins, yeasts, bacteria and enzymes. The specific sugars and the other ingredients vary by the forage.

“The concentration of multiple sugars gives honey its unique properties,” Mr. Seiz said. “This includes its high viscosity and stickiness, its tendency to granulate and its ability to absorb moisture from the air.”

Color, flavor, viscosity and sweetness varies by the plant. It even varies with where that plant is located.

Three types of honey ingredients exist, with liquid honey being the most common. It is extracted from the honeycomb by centrifugal force, gravity or straining and is typically free of visible crystals. Dried honey is derived from pure liquid honey and will include processing aids and other ingredients. The honey is dried to a low-moisture content. This gets converted to free-flowing powders, flakes or granules with a minimum 50% pure honey content.

Both liquid and dried products are used as sweeteners in food formulations, with the former having additional functions, such as ingredient binder and humectant. The third type of honey is known as whipped or creamed honey. It is sold in a crystallized state and at room temperature, used as a spread much like butter or jelly.

Recent retail packaged food innovations shows honey being used in a wide variety of applications, with inclusion recognized on front labels or product names. In some instances, honey is being promoted as a source of natural, sustainable energy.

In grain-based foods, such as hearty bread made with ancient, sprouted and whole grains, honey is recognized for its ability to round out bitter notes and robust textures. It also will function as a natural shelf life extender, as it inhibits mold growth in baked foods by binding moisture. The same property makes it a useful humectant in gluten-free baked foods, which tend to dry and stale easily.

“Honey is commonly used in gluten-free baked goods to give a better taste to off-flavor notes,” Ms. Conklin said.

With spicy foods, honey adds enough sweetness to mellow the initial heat, while with some fruit flavors, honey balances floral notes. In high-protein foods, especially when the protein comes from plants, honey can mask undesirable green, beany off flavors.

Important considerations are in play when working with honey and in product reformulations, as there is no direct one-to-one substitution. This is because honey can be as much as 1.5 times sweeter than sugar, on a dry basis. Honey also contains enzymes that can break down other ingredients in a formulation, impacting the finished product.

“Amino acids in honey can elevate the flavor intensity of spices and herbs, which is why honey is often used in dressings and sauces,” Mr. Seiz said. “Honey will also speed up the Maillard reaction in baked goods, so time and temperature often needs to be adjusted.”

Another reason today’s consumers are attracted to honey is “the cause.” They recognize the role bees play in sustaining the planet. That’s because one in every three bites of food that we eat relies on pollination, according to the National Honey Board. Honey bees are the natural way to pollinate plants