We use cookies to provide you with a better experience. By continuing to browse the site you are agreeing to our use of cookies in accordance with our Cookie Policy.
Skip To Content
Home » Ingredients help grain-based foods transform into ‘keto friendly’

KANSAS CITY — The keto diet, with its restrictions on carbohydrate intake, would appear to be not at all friendly to the grain-based foods sector. Yet in the baking category, the number of new product launches with a keto claim increased 212% globally from 2019 to 2020, according to Mintel’s Global New Products Database.

New product launches often feature the marketing term “keto friendly” in categories such as cereal, chips and bars. Nut flours and non-caloric sweeteners are some of the ingredients reducing the amount of carbohydrates in the items.

“Keto friendly is really, I believe, just a way of reaching a consumer who is eating maybe a higher fat diet than your average diet and looking to limit carbohydrates and especially looking to limit simple carbohydrates like sugars and even starch,” said Rachel Cheatham, PhD, founder and chief executive officer of Foodscape Group, LLC, a Chicago-based nutrition marketing consultancy.

Consumers on a keto diet must restrict carbohydrate intake to below 50 grams per day, which leaves little room for bread, grains or cereals, according to the Academy of Nutrition and Dietetics. The body, since it does not have enough carbohydrates for energy, breaks down fat into ketones, which become the primary source of fuel for the body, leading to weight loss.

"The ketogenic is notoriously difficult to follow, particularly at the beginning."

Technavio, which has a US office in Elmhurst, Ill., forecast the global keto diet market to have a compound annual growth rate of nearly 5% from 2020-24 with 33% of the growth originating from Europe. The Kroger Co., Cincinnati, named “ketotarian” foods as one of its top 10 trends for 2021.

Yet the number of people on a keto diet could be declining. Five percent of the respondents in the 2021 Food and Health Survey from the International Food Information Council, Washington, said they had tried a keto diet, which was down from 8% in 2020. Perhaps the stress of COVID-19 had consumers avoiding such a restrictive diet, said Ali Webster, PhD, head of consumer research for IFIC.

“The ketogenic is notoriously difficult to follow, particularly at the beginning,” she said.

Consumers have trouble staying on the keto diet for longer than a couple months. Dr. Cheatham said.

“For most people, they start to want a wider variety of foods,” she said.

Terms like “keto friendly,” “keto 2.0” and “dirty keto” have become descriptions for less-restrictive diets, she said. Dirty keto could involve a meal with salmon, avocado, zucchini and a half cup of rice, Dr. Cheatham said, adding cyclical keto could involve following a keto diet three or four days a week.

“Walnuts are great for high-fat diets such as keto because they contain 18 grams of fat per 1-oz serving,” said Jennifer Williams, marketing director for the California Walnut Board and Commission, Folsom, Calif. “In addition, walnuts are the only tree nut with an excellent source of ALA omega-3 fatty acids, with 2.5 grams per 1 oz.” 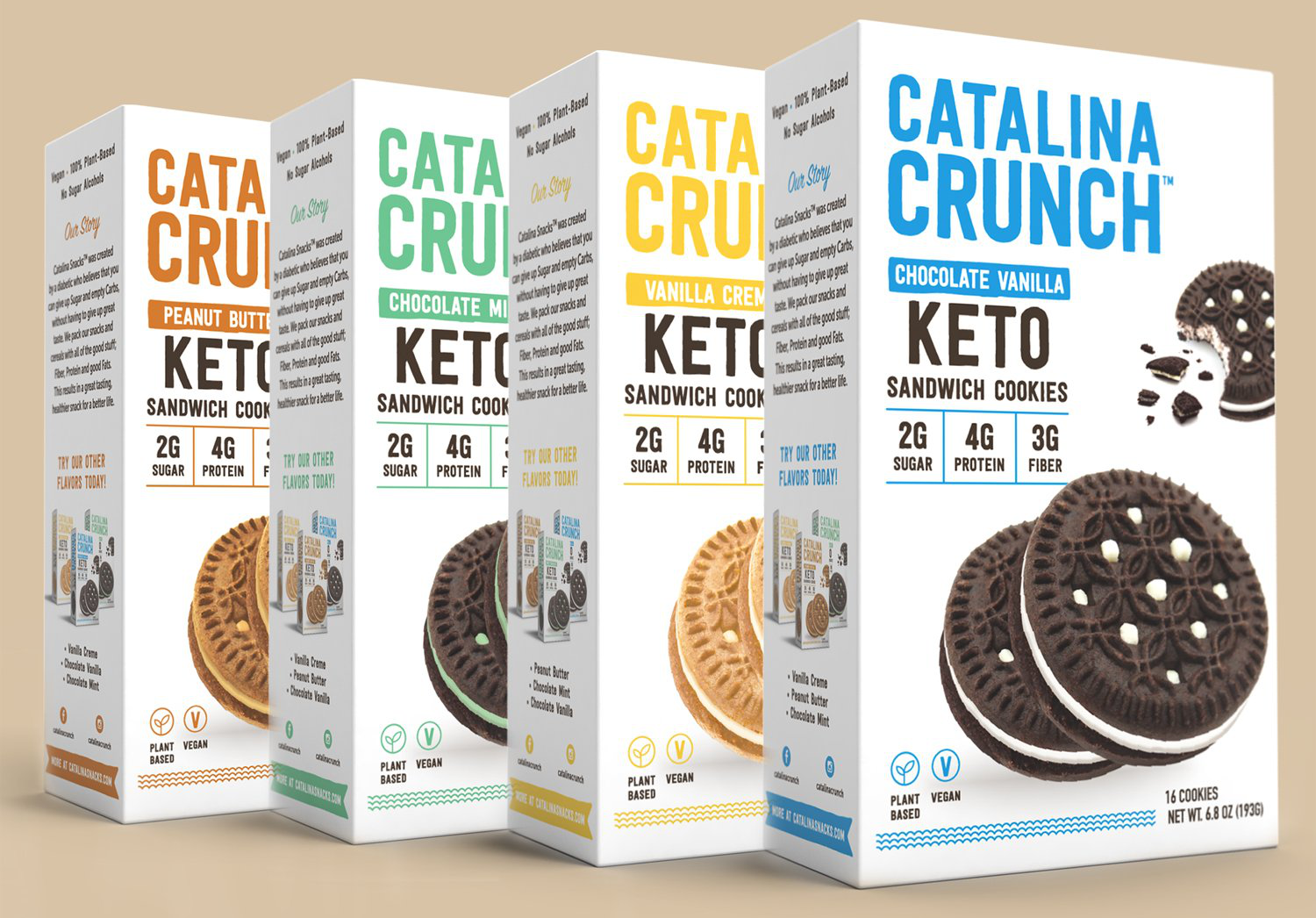 Several keto-friendly new products use allulose as a sweetener, especially since the Food and Drug Administration in 2019 ruled allulose has 0.4 calories per gram, which compares to sugar at 4 calories per gram. Catalina Crunch cookies are sweetened with allulose, cane sugar and inulin from chicory root. A 24-gram serving (two cookies) contains 11 grams of carbohydrates. Kashi, a business of Kellogg, now offers Kashi GO Cereal sweetened with allulose, monk fruit extract and inulin from chicory root. The dark cocoa variety of the cereal has 19 grams of carbohydrates per 40-gram serving. The cinnamon vanilla has 18 grams per 40-gram serving.

The keto diet is not that new. It has been used to manage epilepsy for more than 100 years, according to the Academy of Nutrition and Dietetics. Recent studies are evaluating the keto diet as a treatment for obesity and diabetes, but research findings are limited. Weight loss is a common reason for following the keto diet.

“Is it OK for a quick start weight loss?” said Julie Miller Jones, PhD, a professor in the Department of Family, Consumer and Nutritional Sciences at St. Catherine University in St. Paul, Minn., and a member of the Grain Foods Foundation’s scientific advisory board. “I suppose, but my concern is if we look at weight loss that works, it’s one that people can do for the rest of their lives.”

Studies show consumers may lose weight over the first six to nine months on the keto diet, she said, but studies that cover two years or more show they gained the weight back because they did not stay on the diet.

What consumers omit from their diet could have a negative impact, though. Many fruits are not permitted in the keto diet, Dr. Cheatham said. Some vegetables are but not the starchier ones like potatoes and squash.

“Even many legumes are not allowed because they also have a carbohydrate component,” she said. 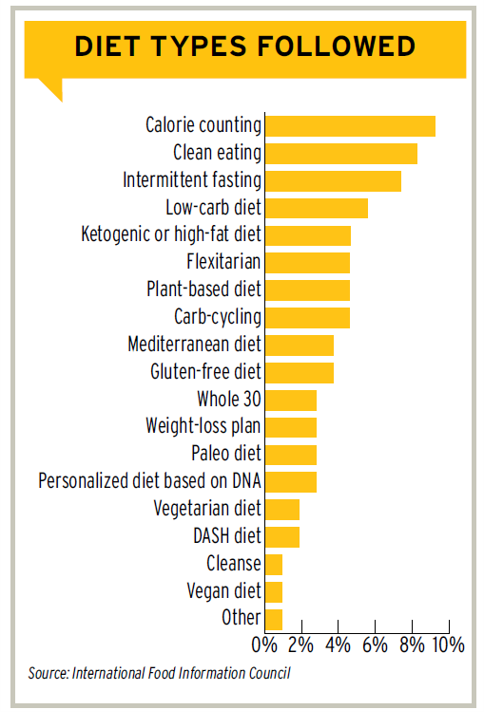 Low-carbohydrate diets tend to attract consumers because they want to lose weight, said Glenn Gaesser, PhD, a professor in the College of Health Sciences at Arizona State University and a member of the GFF’s scientific advisory board. When the IFIC survey respondents were asked motivators for adopting a diet, the top answer was weight loss at nearly 40%.

“That’s decades down the road for most people,” Dr. Gaesser said. “No one makes decisions about what they are eating today on the basis of what that food might do for them 20 or 30 or 40 years later. It’s for immediate effect.”

A study that appeared online Aug. 16, 2018, in Lancet Public Health investigated carbohydrate consumption and mortality. Researchers from the Brigham and Women’s Hospital in Boston, the Harvard T.H. Chan School of Public Health in Boston and the University of Minnesota in Minneapolis studied 15,428 adults of the ages 45 to 64 with a median follow-up of 25 years. They found a U-shaped association between the percentage of calories consumed from carbohydrates and mortality. A percentage of 50% to 55% was associated with the lowest risk of mortality. Both low-carbohydrate consumption, meaning less than 40%, and high-carbohydrate consumption, meaning more than 70%, were associated with greater mortality risk. The National Institutes of Health provided funding for the study.

“You can find meta-analyses on both sides that show there might be a slight benefit to the keto low-carb (diet) to other meta-analyses that show just the opposite,” Dr. Gaesser said. “On the whole I think most of the studies seem to say it’s pretty much a toss-up and the bottom line is just calorie restriction for weight loss.”

Low-carbohydrate diets have been popular at least since Atkins started in the 1970s, he added.

“I think the ketogenic diet is something that is the sexy diet today,” Dr. Gaesser said.