We use cookies to provide you with a better experience. By continuing to browse the site you are agreeing to our use of cookies in accordance with our Cookie Policy.
Home » Questions arise as non-GMO and BE co-exist

Questions arise as non-GMO and BE co-exist

KANSAS CITY — Over the past decade the food and beverage industry, as well as consumers, have gained insight on GMOs (genetically modified organisms) and non-GMO ingredients. Now issues are arising from another acronym — BE (bioengineered). 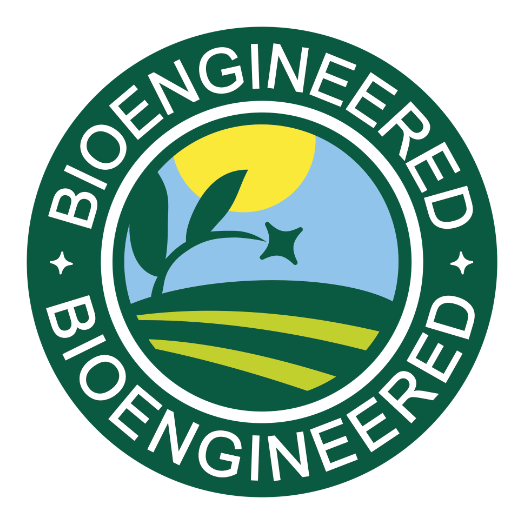 The new disclosure requirements may be confusing at the consumer level, said Lea Buerman, regional regulatory and scientific affairs leader for Minneapolis-based Cargill.

“It introduces a new term — BE (bioengineered) — that most consumers likely won’t recognize yet and may not associate with GMOs,” she said.

In one difference between the USDA’s BE law and the Non-GMO Project, the BE standard does not address new technology like CRISPR, Mr. Eisenbies said. The Non-GMO Project does. This means a product that is created through CRISPR may not need a BE listing, but the product would not qualify for Non-GMO Project verification.

“The process of our verification, what we go through, will certainly assist (food companies) in understanding if they need to comply with the BE law,” he said, adding “the companies that are in the program, it will be ‘easy-peasy’ for them to continue with non-GMO verification.”

“It’s been pretty steady 10% year-over-year growth in the sale of verified products,” Mr. Eisenbies said. “That’s gone up a little bit during COVID.”

“Our cocoa and chocolate offerings provide a good example here,” Ms. Buerman said. “There are no commercialized varieties of genetically modified cocoa beans at this time. However, in most instances, the chocolate liquor is blended with sugar, lecithin and other ingredients that may be derived from GMOs. As a result, we offer both GMO and non-GMO options.”

Ms. Stauffer added, “At this point, we haven’t seen large swaths of customers looking to reformulate products to avoid BE labeling requirements. However, there remains steady interest in non-GMO ingredients, and we’re committed to providing our customers with both options.

“We believe the two can and will co-exist to feed a growing population. We believe GMOs are proven safe and help deliver a number of benefits (e.g. increased yields, sustainability). Cargill believes that biotechnology will play an important role in feeding a growing global population.”

There are no federal standards for non-GMO products in the United States.

“We use Non-GMO Project because it is the most requested third-party certification among our food and beverage customers,” Ms. Buerman said.

“At the time we became verified, we had already been supplying non-GMO ingredients for nearly 20 years, which included GMO testing,” Ms. Tesch said. “Similar to our organic certification, our Non-GMO Project verification provides our customers with third-party verification with an accredited organization.”

“As consumers are becoming more aware of labeling and regulatory guidelines, the National Bioengineered Food Disclosure Standard may further consumer education on the differences between GMO and non-GMO ingredients, which allows consumers to make a concerted choice as to the types of products they wish to purchase,” Ms. Tesch said. “We believe it will create more transparency and education to consumers.”

It’s possible food and beverage products containing sugar from GMO sugar beets or high-fructose corn syrup may not need to be listed as bioengineered (BE) under the US National Bioengineered Food Disclosure Standard act. Foods with undetectable modified genetic material are not bioengineered foods, according to the US Department of Agriculture law.

Ninety percent of the sugar beets grown in the United States are BE/genetically modified, said Hans Eisenbeis, director of marketing and communications for the Non-GMO Project, Bellingham, Wash. In the end product, however, the modified genetic material is not detectable because of the high levels of processing, he said. 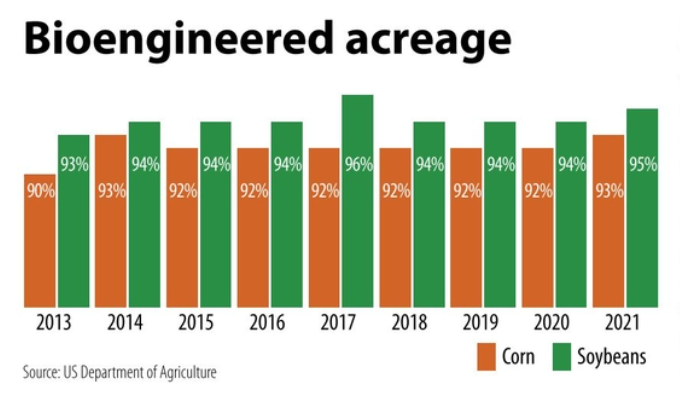 “It’s so refined that the end product does not have detectable genetically modified material,” he said.

Although such a product may not need to be listed as BE, it would fail to qualify for Non-GMO Project certification.

“From our perspective and our definition, that’s GMO,” Mr. Eisenbeis said.

The BE listing has led to a “three-bucket world,” said Lea Buerman, regional regulatory and scientific affairs leader for Minneapolis-based Cargill.

“But there’s also a third group of products that don’t require BE labeling, but aren’t non-GMO. In other words, some products may be derived from genetically modified crops, but due to various processing methods, the genetically modified proteins and DNA are removed. In this situation, they do not meet the criteria for a non-GMO claim, but at the same time, they are exempt from the USDA’s bioengineering labeling law. Some of our corn starches as well as our high-fructose corn syrup would be examples of products that could fall in this third bucket.”

She added more than 90% of US corn is produced using genetically engineered seed.

The non-detectable ruling was one element in a lawsuit filed July 27, 2020, in the US District Court for the Northern District of California. The Center for Food Safety, the Natural Grocers, Citizens for GMO Labeling, Label GMOs, Rural Vermont, Good Earth Natural Foods and the PCC (Puget Consumers Co-Op) sued the USDA. The majority of genetically engineered foods are not whole foods but rather highly processed foods with genetically engineered ingredients like soda and oils, according to the lawsuit. The decision by the USDA to not cover undetectable bioengineered ingredients was contrary to the National Bioengineered Food Disclosure Standard, according to the lawsuit.

A study that appeared online Sept. 7, 2020, in the journal Foods examined how researchers were able to detect genome-edited plant material in a herbicide-tolerant canola variety. While GMO canola varieties exist, so do non-GMO canola varieties. The researchers were from The Health Research Institute in Fairfield, Iowa; Somagenics, Inc. in Santa Cruz, Calif.; and The Sustainability Council of New Zealand. Greenpeace, the Non-GMO Project and The Sustainability Council of New Zealand were among the groups funding the project.

“Gene-edited foods must be labeled as GMOs under the US National Bioengineered Food Disclosure Act,” said Bill Freese, science policy analyst at the Center for Food Safety. “The approach used to develop this new test can be applied to develop detection methods for most, if not all, gene-edited crops, demonstrating that there is no longer any excuse for food companies to evade the law by claiming gene-edited ingredients are undetectable.” 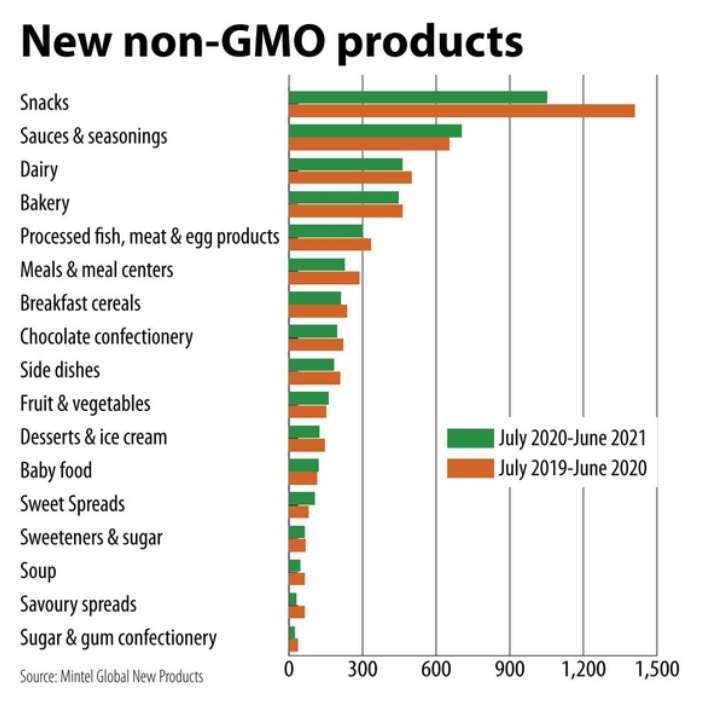 Technavio, which has a US office in Elmhurst, Ill., forecast the global non-GMO foods market to have a compound annual growth rate of nearly 14% from 2021-25. The Hartman Group, Bellevue, Wash., in a survey of 2,347 US adults this year asked consumers what they were looking for when shopping for foods and beverages. Sixty-two percent said non-GMO certified, an increase of six percentage points from a 2019 survey.

Many food manufacturers reined in innovation during the COVID-19 pandemic, deciding to focus on keeping retail shelves stocked amid strong demand and putting new product introductions on hold. The non-GMO market apparently was not an exception.