NEW HAVEN, CONN. — Efforts started by a professor in the Yale School of Management to list what corporations are doing in response to Russia’s invasion of Ukraine have gained the attention of industry and national media outlets.

Over 450 companies, including dozens of food and beverage companies, on the list had reduced or eliminated their operations in Russia by March 23. Jeffrey Sonnenfeld, DBA, senior associate dean for leadership studies at the Yale School of Management in New Haven, wrote a bylined article that appeared in Fortune March 7. Since then, media outlets such as CBS News, National Public Radio and MSNBC have interviewed him.

The list has evolved and by March 23 divided companies into five groups based on the degree of their detachments from Russia: withdrawal, suspension, scaling back, buying time and digging in. Besides squeezing Russia financially, companies and their brands leaving the country may make Russian citizens question the news media in their own country, Dr. Sonnenfeld said in a March 22 interview with Food Business News.

“It’s a way on a symbolic level of getting to Russian people that what they’re hearing about their role in the world is different than the truth,” he said, adding many Russians believe their country is liberating Ukraine from a neo-Nazi regime. 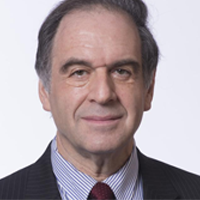 “Of course, the reality is their government is the vicious villain against millions of innocent civilians,” Dr. Sonnenfeld said.

The companies that had joined the list by March 22 shut down 25% of Russia’s gross domestic product (GDP) by leaving, he said.

“That is a huge message that something is wrong, and they are not getting the truth,” Dr. Sonnenfeld said of Russian citizens.

J.P. Morgan Research forecasts Russia’s economy will contract 35% quarter-over-quarter and seasonally adjusted in the second quarter while inflation in the country could hit 17% by the end of the year, up from a forecast of 5.3% before the war.

Dr. Sonnenfeld likened the situation in Russia to apartheid in South Africa about three decades go. More than 200 companies, including the Coca-Cola Co., IBM and General Motors, divested from that country to protest English rule.

“Bishop Desmond Tutu (a leader in the fight against apartheid) told me personally over lunch in the early ‘90s how important that was to marry the governmental activity with the corporate activity and the very strong messaging that went to South Africans of condemnation,” Dr. Sonnenfeld said. “That was 200 companies. Here, we are approaching 500 companies now.”

The list, first published the week of Feb. 28, originally had two groups: withdraw and remain. Several dozen companies had withdrawn from Russia at that time. Dr. Sonnenfeld, his team of experts, research fellows and students at the Yale Chief Executive Leadership Institute update the list, now broken into five groups.

The first group, withdrawal, covers companies who completely halted Russian operations. Aldi is one example as the retailer removed products from Russia.

The third group, scaling back, includes companies reducing current operations and holding off on new investments. They included Bunge, Kellogg Co. and PepsiCo, Inc. on March 23.

Companies in the fifth group are “digging in,” meaning they are not exiting Russia or reducing activities. Stocks of those companies plunged between 12% to 35% after Russia invaded Ukraine Feb. 24, Dr. Sonnenfeld said.

Gruma SAB de CV, Monterrey, Mexico, remained on the “digging in” list March 23. Gruma acquired Solntse Mexico, a tortilla company in Russia, in 2011, launched its Mission brand in the country in 2014 and inaugurated a tortilla production plant in Russia in 2017.

Gruma’s stock price on the Bolsa Mexicana de Valores, Mexico’s stock exchange, closed at a little under 265 pesos ($13.14) per share March 22, which was down from a little under 280 pesos per share on March 1. Mexico, unlike the United States, had not issued sanctions on Russia as of March 23.

Companies continue to move up to higher groups on the list. Subway rose to the buying time group from the digging-in group after announcing March 21 it would not make any direct investments nor open any restaurants in Russia and would redirect any profits from operations in Russia to humanitarian efforts providing meals to refugees across Europe. Subway has about 450 franchised restaurants, all independently owned, in Russia that are operated by local franchisees and managed by an independent master franchise, not Subway corporate employees. The master franchisee manages all operations, marketing and the supply chain.