We use cookies to provide you with a better experience. By continuing to browse the site you are agreeing to our use of cookies in accordance with our Cookie Policy.
Home » How Revival Food Co. elevated almond butter

Ms. Klein left the world of competitive dance nearly a decade ago. Fed up with the physical and mental toll it was taking, she embarked on a journey to rediscover what health and wellness meant for her. The quest to adopt a cleaner diet included a switch from peanut butter to almond butter. She heard it was a healthier choice but quickly discovered that most options available were bland. All the almond butters she tried lacked flavor and a satisfying texture.

“I couldn’t figure out why almond butter was the boring, ugly stepchild of peanut butter,” Ms. Klein said. “So, I just started making my own at home in a food processor.” 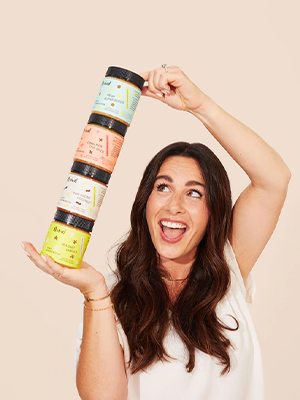 She combined almonds with honey and maple syrup before landing on vanilla as her preferred sweetener. She paired it with coconut oil and sea salt to create the original Revival nut butter recipe.

After using the spread as a wedding favor, where it was met with rave reviews from friends and family, Ms. Klein began selling the product at farmer’s markets in 2014. It developed a loyal following and soon landed on shelves at a handful of local retailers. Revival’s big break came in 2019, when Ms. Klein traveled to Natural Products Expo East for her first-ever trade show.

“I was having this existential moment where I either needed to go big or go home,” she said. “If I wasn’t going to scale up, I was going to simplify things and just sell online to people who already loved it.”

A buyer for nut butters and spreads at Walmart stopped by her booth, tasted the product and loved it.

“There I was, an Indiana mom with my homemade almond butter and zero experience in the industry, talking to the nation’s largest retailer,” Ms. Klein said. “It was the catapult that got us to finally get a copacker and start the process of scaling up.”

The basic recipe remains virtually the same, and the brand has worked with the same sustainable farmer since its inception. Still, the process of scaling helped fine-tune Revival’s proposition.

“When I look at the nut butter category, it’s overwhelming because everything is ‘the cleanest’ or ‘the most natural’ or ‘the most organic,’” Ms. Klein said. “I look at that and think, ‘Who cares?’

The no added sugar claim contributed to the brand’s success and helped shape its positioning, she added. The product’s texture — described on the package as “creamy, spreadable crunch — brings another point of difference, as do the unique flavor profiles.

“Most nut butters use some sort of sweetener to try and make it palatable,” Ms. Klein said. “We just use our superfoods to flavor it. And we go hard on flavor. We’re not trying to be another honey maple almond butter.”

With distribution across 48 states, Ms. Klein sees opportunities to leverage Revival’s growing fanbase and bring additional products to market. Expansion into adjacent categories and partnerships with other startups may be on the horizon.

“It’s easy to get stuck because you don’t have the resources to scale and you haven’t established that trust with shoppers yet,” she said. “I want to bring more innovative products to the table under the Revival brand, whether it’s something we’re developing ourselves or in partnership with someone else.”