“Nestle’s insular, complacent, and bureaucratic organization is overly complex, lethargic and misses too many trends,” Mr. Loeb wrote in a July 1 letter to Nestle’s top executives.

“A year ago, Third Point announced an investment of more than $3 billion in Nestle and a prescription for the company to ensure long-term value for its stakeholders by improving profitability, capital efficiency, and its portfolio following years of lackluster financial performance,” Mr. Loeb said. “Over the past year, organic sales have weakened as Nestle continues to lose market share in key focus areas, and the stock has underperformed. Although the company has taken some steps consistent with our suggestions, the modest pace and magnitude of these changes suggest that Nestle feels satisfied with its position. Nestle’s Articles of Association state that the company will focus on 'long-term, sustainable value creation' in operating its business. We do not believe that the company is living up to this mandate today with its muddled strategic approach, and we are concerned that Nestle does not fully appreciate the rapidly occurring shifts in consumer behavior that threaten its future.”

Mr. Loeb has urged Nestle to be sharper in articulating its strategy, noting that the company’s current strategy is “vaguely defined and plagued by internal inconsistencies.” 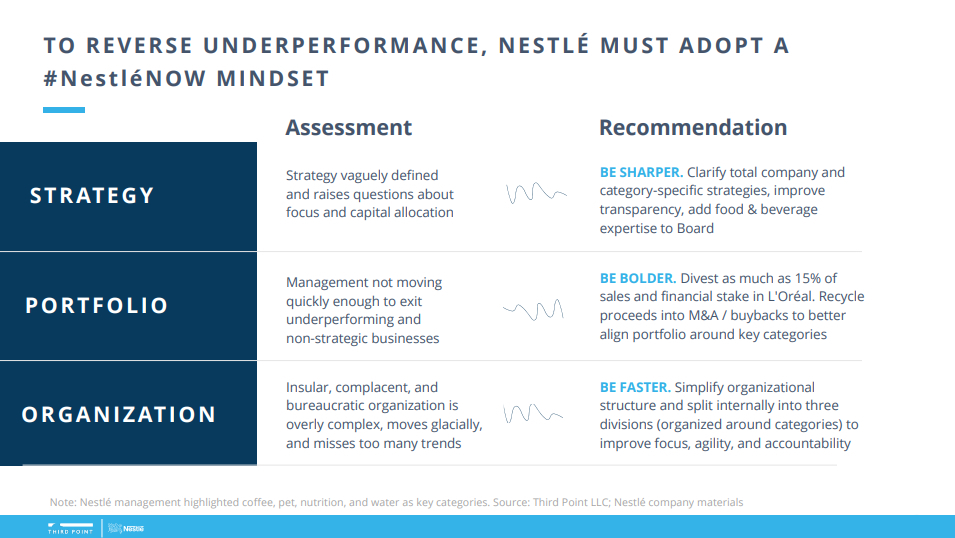 “Nestle describes itself as a company focused on ‘nutrition, health and wellness,’ but many categories and brands continue to fall outside that definition,” he wrote.

In addition to Mr. Loeb’s letter to Nestle’s executives, Third Point published a report at www.nestlenow.com. In the 34-page presentation, Third Point laid out plans for reinvigorating Nestle’s structure by separating the business into three divisions: Beverages, Nutrition and Grocery.

Beverages would comprise coffee and water; Nutrition would include pet, infant formula, medical nutrition, milk products and consumer health; and Grocery would comprise confectionery, prepared meals, ice cream and other. 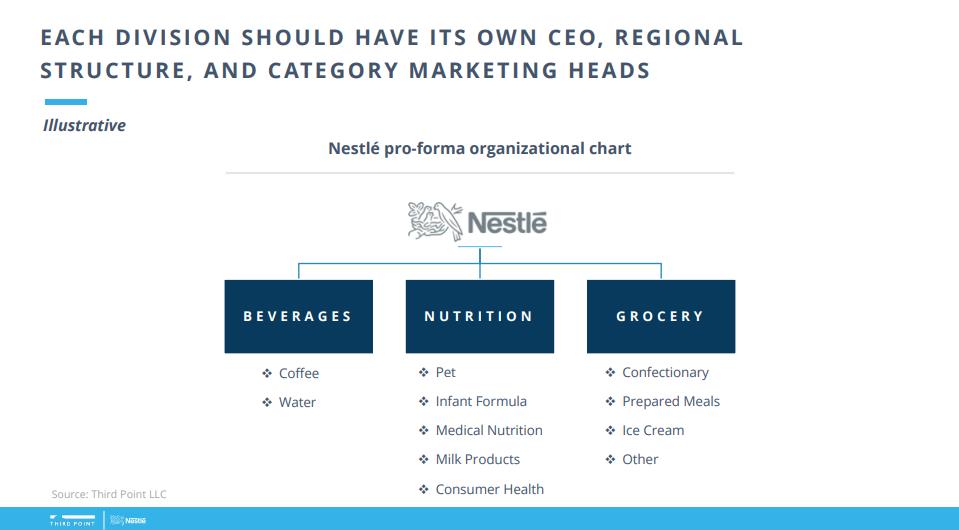 Mr. Loeb in his letter also urged Nestle to be bolder in reshaping the company’s portfolio, noting that management “is not moving quickly enough to exit underperforming and non-strategic businesses.”

“Nestle has divested less than 2% of sales despite a thriving environment for global M.&A.,” Mr. Loeb said. “We believe there is little to no chance that the current portfolio can sustainably deliver Nestle’s targeted mid-single digit per cent organic sales growth. The portfolio continues to have significant exposure to categories external to its areas of focus that have lower growth, lower margins, and command lower valuations which, in aggregate, erode the strengths of the core businesses.”

Mr. Loeb said he would like to see Nestle divest as much as 15% of sales either through sales, spin-offs or other methods to better align the portfolio around key categories.

He also said he would like to see Nestle be faster in overhauling the organization. He said Nestle has been “woefully late” to participate in some key trends in the food and beverage industry, and as a result has fallen behind competitors who are capturing market share.

Responding to Mr. Loeb’s letter, Nestle issued an update on its long-term value creation strategy, saying it has delivered results through “swift and decisive action.” Over the past year the company said it has accomplished numerous goals, including transitioning to a new c.e.o., accelerating the

repositioning of the portfolio, delivering revenue growth, investing in brands and innovation, and returning capital to shareholders.

Specific actions taken include the formation of a global coffee partnership with Starbucks, conclusion of the acquisition of global nutrition health leader Atrium Innovations, and the sale of its U.S. confectionery business for $2.8 billion.

Nestle said it also is on track to meet its 2020 goals for margin improvement, operating profit and structural cost savings.

In September 2017, Mr. Schneider said Nestle was considering divestitures equal to 10% of total sales. The U.S. confectionery business accounted for 3% of annual sales.