We use cookies to provide you with a better experience. By continuing to browse the site you are agreeing to our use of cookies in accordance with our Cookie Policy.
Home » Hard kombuchas are hitting the mainstream

Hard kombuchas are hitting the mainstream

CHICAGO — There is an emerging and quickly growing category of adult-centric refreshments in the United States dubbed “new school alcohol,” said Brent Coons, director of natural insights, Spins, Chicago. These are single-serve, portable and often “better-for-you” alcoholic beverages that go beyond craft beer and artisan wine. Many make such label claims as less sugar, gluten-free and lower calories. Hard kombucha is one such new school alcohol.

This new concept in microbrew is based on kombucha, a fermented tea drink. In the past few years, kombucha has gone mainstream, with many retailers often stocking multiple brands of the perishable beverage. It is made with a microbial cocktail referred to as S.C.O.B.Y., an acronym for symbiotic culture of bacteria and yeast, and provides a healthy dose of probiotics. It is slightly effervescent and naturally has a trace of alcohol, which is less than 0.5% alcohol by volume (A.B.V.). This is the cut-off line for the U.S. Food and Drug Administration’s distinction between alcohol and non-alcohol.

To make the “hard” high-alcohol version, brewers modify the manufacturing process to include an extra fermentation step. This includes an additional strain of yeast and extra sugar for the fermentation, which often is extended by a week or two. Some microbrewers are blending kombucha with craft beers to add a twist of healthfulness.

Andrew Clark, brewmaster and one of the three founders of Boochcraft, Chula Vista, Calif., boosts the alcohol content with brewing yeast. He then flavors the fermentations with cold-pressed fruit and vegetable juices, along with herbs and even chili peppers. 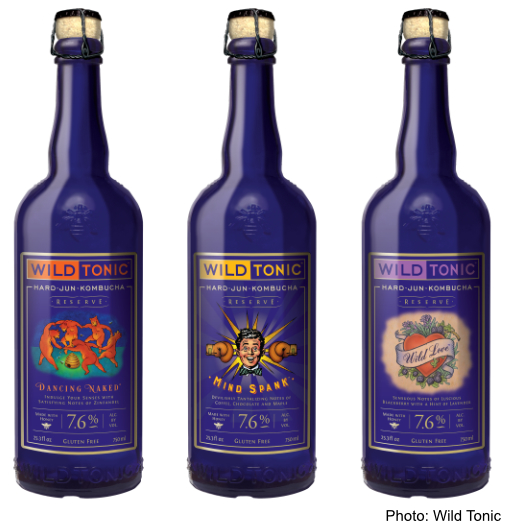 It is not as easy as it sounds, as there are many microorganisms competing to ferment the sugar substrates. The final beverage must have the right amount of sweetness — and sugar content, if carbohydrate concentration is a label claim — and hit the target alcohol content during every micro-brew cycle.

While there are a limited number of processors in this sector, it’s growing, said Paul Gatza, director of the Brewers Association, Boulder, Colo., who addressed the evolving craft beer category when speaking to independent retailers at the annual meeting of the National Grocers Association, Arlington, Va., held Feb. 24-26 in San Diego. While Mr. Gatza said many of the products are “too vinegary” for his liking, he believes the better-for-you halo they possess may appeal to today’s growing health- and wellness-seeking adult beverage consumer.

The folks at Wild Tonic, Cottonwood, Ariz., are calling hard kombucha the “it” beverage of the year. They will be showcasing their namesake beverage at Natural Products Expo West this week in Anaheim, Calif.

The company refers to its hard kombucha as jun. It’s made by fermenting tea and honey with a special S.C.O.B.Y. designed to feed on honey and yield the higher alcohol content. The result is a lighter and smoother taste void of vinegar notes, according to the company. Wild Tonic comes in two alcohol concentrations: 5.6% and 7.6% A.B.V.

The North Park neighborhood of San Diego is home to JuneShine, the world’s first hard kombucha “jun” bar. It opened in June 2018 and is a 2,000-square-foot brewery and 500-square-foot tasting room with a production capacity of 2,000 barrels. While up to a dozen flavors (6% A.B.V.) are on draft in the tasting room, the company currently distributes four flavors — blood orange mint, cucumber mojito, honey ginger lemon and Midnight Painkiller — in 16-oz cans throughout San Diego and select accounts in Orange county and Los Angeles. 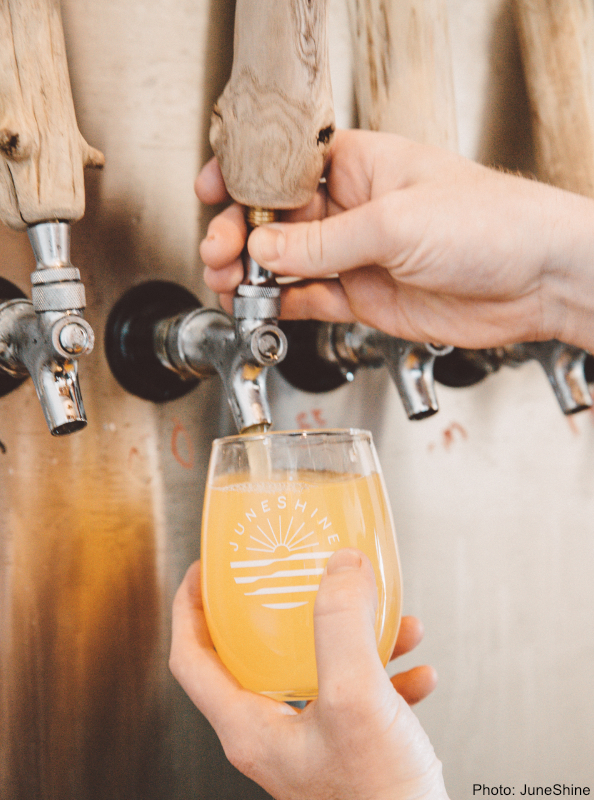 The company is expanding. In early February it simultaneously closed a seed round of financing and acquisition of all brewing assets of a facility in nearby Scripps Ranch. Once the new brewery opens, the North Park location will continue to run as a tasting room and research and development facility.

The company plans to open Scripps Ranch — a 24,000-square-foot facility with a 100,000-barrel production capacity — for production and to the public in summer 2019. This will be paralleled by distribution expansion within and outside of California.

“As JuneShine seeks to increase production in great volume, and also become a best-in-class leader for our product category, it became obvious that this was a timely opportunity,” said Greg Serrao, co-founder and chief executive officer. “In many ways, we are just getting started. The first thing we will do with additional product, before going anywhere, is double down on our home market.”