WASHINGTON — The rate of obesity among U.S. adults has reached an historic level, with nine U.S. states turning in adult obesity rates above 35% in 2018, up from seven states at that level in 2017, according to “State of Obesity: Better Policies for a Healthier America,” a report issued Sept. 12 by the Trust for America’s Health (T.F.A.H.) and the Robert Wood Johnson Foundation (R.W.J.F.).

Within the past five years (2013-18), 33 states had statistically significant increases in their rates of adult obesity, according to the study. 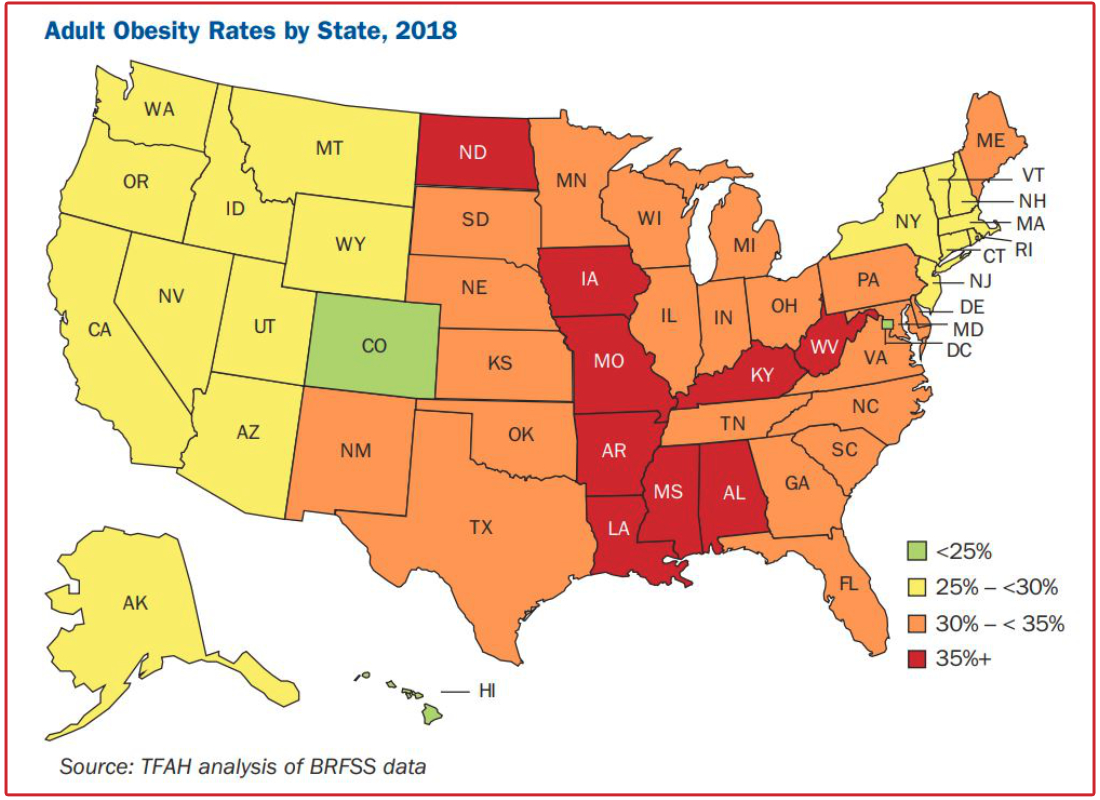 “These latest data shout that our national obesity crisis is getting worse,” said John Auerbach, president and chief executive officer of T.F.A.H. “They tell us that almost 50 years into the upward curve of obesity rates we haven’t yet found the right mix of programs to stop the epidemic. Isolated programs and calls for life-style changes aren’t enough. Instead, our report highlights the fundamental changes that are needed in the social and economic conditions that make it challenging for people to eat healthy foods and get sufficient exercise.”

Despite the rising adult obesity rates, Mr. Auerbach did note that some new data suggest certain policies are having a positive impact. Obesity rates for children enrolled in Special Supplemental Nutrition Program for Women, Infants and Children (WIC) continue to decline, to 13.9% in 2016 from 15.9% in 2010.

“Policies such as these are proving effective in changing behavior,” he said. “But, no single solution — however promising — is sufficient. Obesity is a complex problem and will need multi-sector, multi-factor solutions. Creating the conditions that allow people to more easily make healthy choices is central to preventing obesity, as is prioritizing investment in those communities most affected by the crisis.”

The report also includes 31 recommendations for policy action by federal, state and local governments, across several sectors, designed to improve access to nutritious foods. The recommendations include:

The full report is available here.