We use cookies to provide you with a better experience. By continuing to browse the site you are agreeing to our use of cookies in accordance with our Cookie Policy.
Home » Emerging trends in the natural and specialty marketplace

Emerging trends in the natural and specialty marketplace

The event, which was scheduled for March 3-7 in Anaheim, has been postponed indefinitely due to concerns related to coronavirus (COVID-19). More than 85,000 attendees were expected to gather to view the latest innovations in the natural and specialty marketplace from 3,600 exhibiting companies, including many startups and small businesses.

Prior to the event — and its postponement — a number of brands offered a glimpse of the products they had planned to showcase and sample. Food Business News compiled a list of trends to watch in the year ahead based on the expected Expo West debuts.

Functional beverages and snacks infused with cannabidiol or adaptogens such as mushrooms and herbs are generating buzz. Products and packaging positioned around sustainability — think chocolate bars made with milk from grass-fed cows or compostable tea bags — were set to debut. Regenerative agriculture and upcycled ingredients are gaining traction in new product development.

While a number of exhibitors at Expo West planned to unveil plant-based alternatives to meat, dairy and egg products, several brands are taking a blended approach. An example is Seemore Meats and Veggies, Brooklyn, NY, which produces sausages that combine chicken or pork with vegetables such as broccolini, beet, carrots and celery. 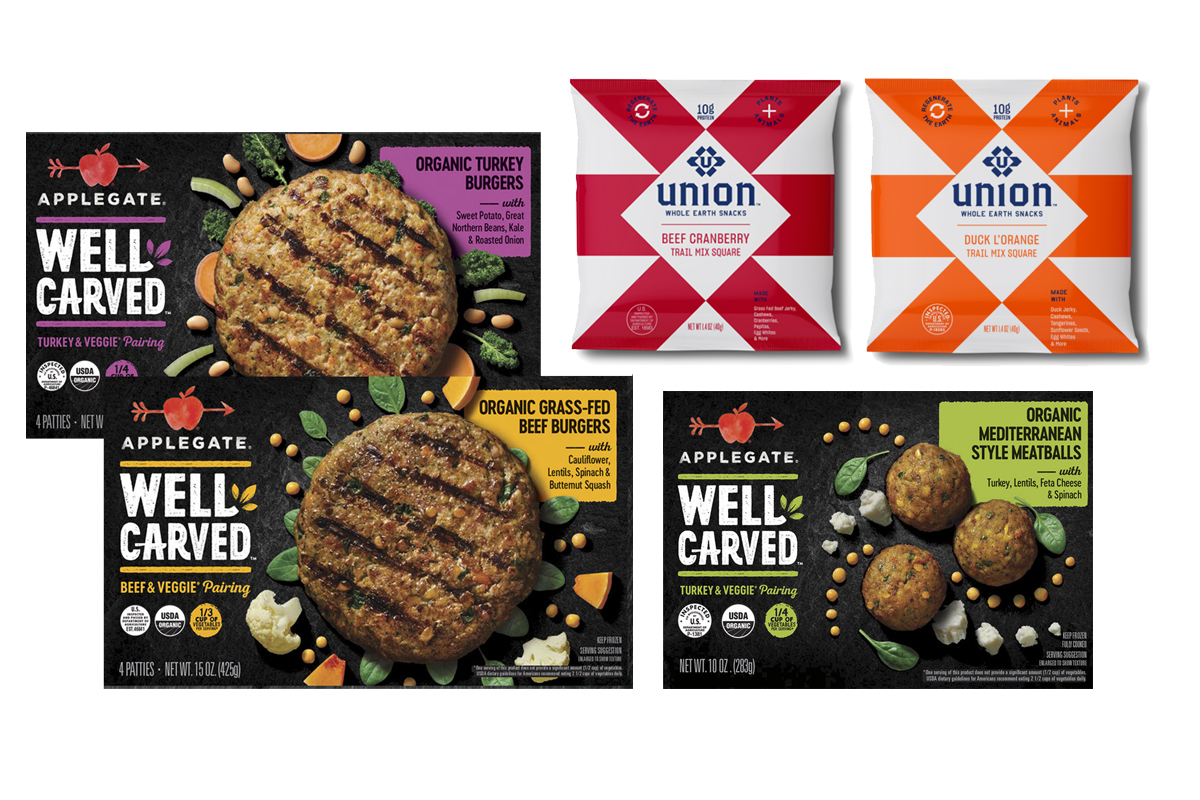 ”People love meat, and they aren’t going to simply stop eating it, nor should they have to, regardless of how many highly processed soy- or pea-based burgers you put on the market,” said John Ghingo, president of Applegate. ”Well Carved offers an easy way for consumers to enjoy the real, clean meat they crave while also reducing overall consumption.” 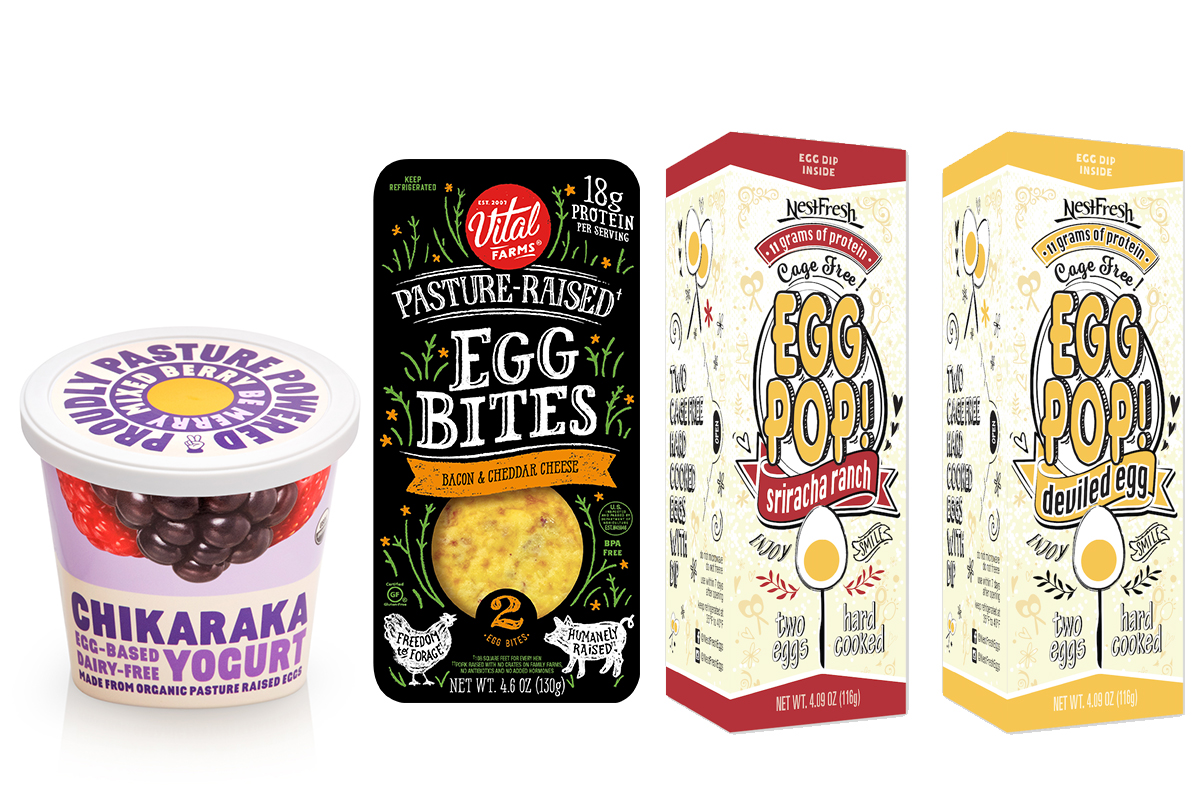 The egg has shed its unsavory (and, as it turns out, unscientific) reputation as a contributor to high cholesterol and symbolizes freshness and wholesomeness in new products positioned as convenient and low in carbohydrates. Concepts that were expected to be featured at Expo West include tortilla-style wraps, snack puffs and crisps formulated with eggs or egg whites as the primary ingredient.

Handsome Brook Farm, New York, planned to introduce Chikaraka, a brand of dairy-free yogurt based on eggs. Featuring coconut cream, banana and berries, the product is described as mildly sweet, tart and creamy.

“We’re excited to lead innovation in the egg category with eggs that meet the only standards that really matter — both organic and pasture-raised,” said Jordan Czeizler, president of Handsome Brook Farm. “Chikaraka will both surprise you and become a go-to in your refrigerator, fueling your day and cracking up a rapidly growing category.” 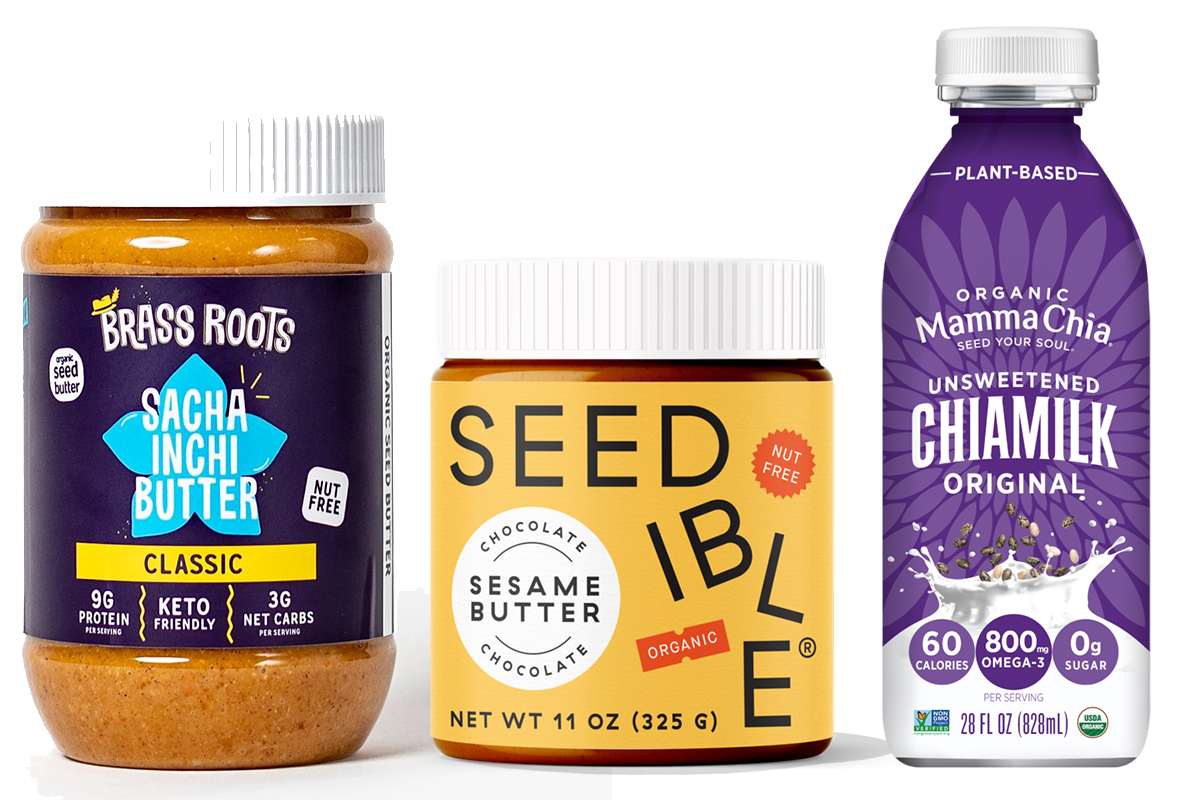 Seeds in the spotlight

Foodies Vegan, Cincinnati, has developed Pumfu, a soy-free tofu alternative made only with organic pumpkin seeds and water. The product contains 17 grams of protein per serving.

The sacha inchi seed is the star of snacks and spreads offered by Brass Roots, New Orleans. The company’s sacha inchi seed butter is available in classic, maple cinnamon and unsweetened varieties and contains 4,800 mg of omega-3 fatty acids per serving. Originating from Peruvian highlands, the sacha inchi seed, also called the incan peanut, is rich in alpha-linolenic acid and plant-based protein with prebiotic fiber.

Mamma Chia, Carlsbad, Calif., has announced an organic milk alternative made with chia seeds that is rich in omega-3 fatty acids and calcium, with medium-chain triglycerides and no added sugar.

Buckwheat — which is a seed, not a grain — also is gaining ground in snacks and pantry staples. Chicago-based Lil Bucks makes snacks and toppings featuring sprouted buckwheat, which delivers six grams of complete protein, five grams of fiber and a good source of magnesium per serving.

Tigernut — which is not a seed, a nut or a grain, but a high-protein, high-fiber tuber — is popping up in more products, including grain-free tortilla chips, pancakes and brownie mix. 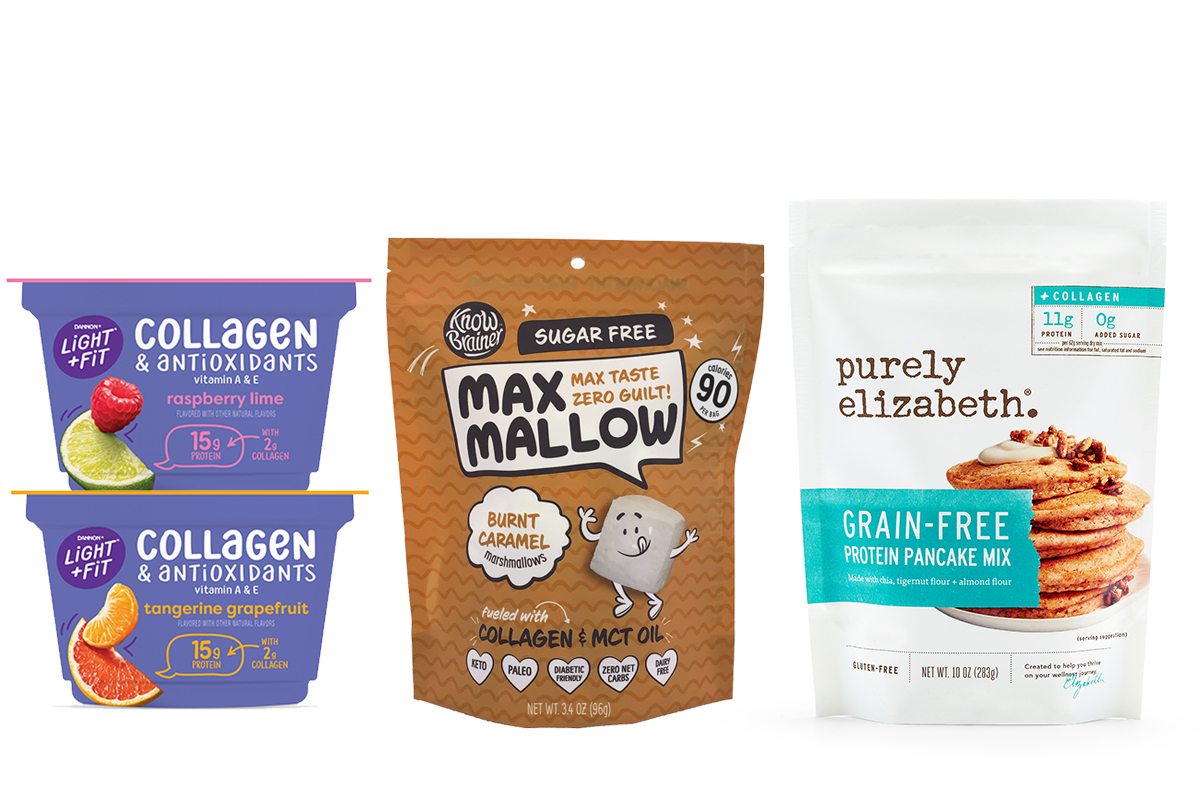 Linked to skin and joint health, collagen is a rising star in the supplement and sports nutrition categories. More packaged snacks and beverages are featuring the functional ingredient.

From Know Brainer Foods, Lafayette, Colo., Max Mallow is a line of zero-sugar marshmallows enriched with collagen and MCT oil. The products are sweetened with inulin, birch xylitol and monkfruit and feature such flavors as mint chip, golden milk, burnt caramel and cinnamon toast. 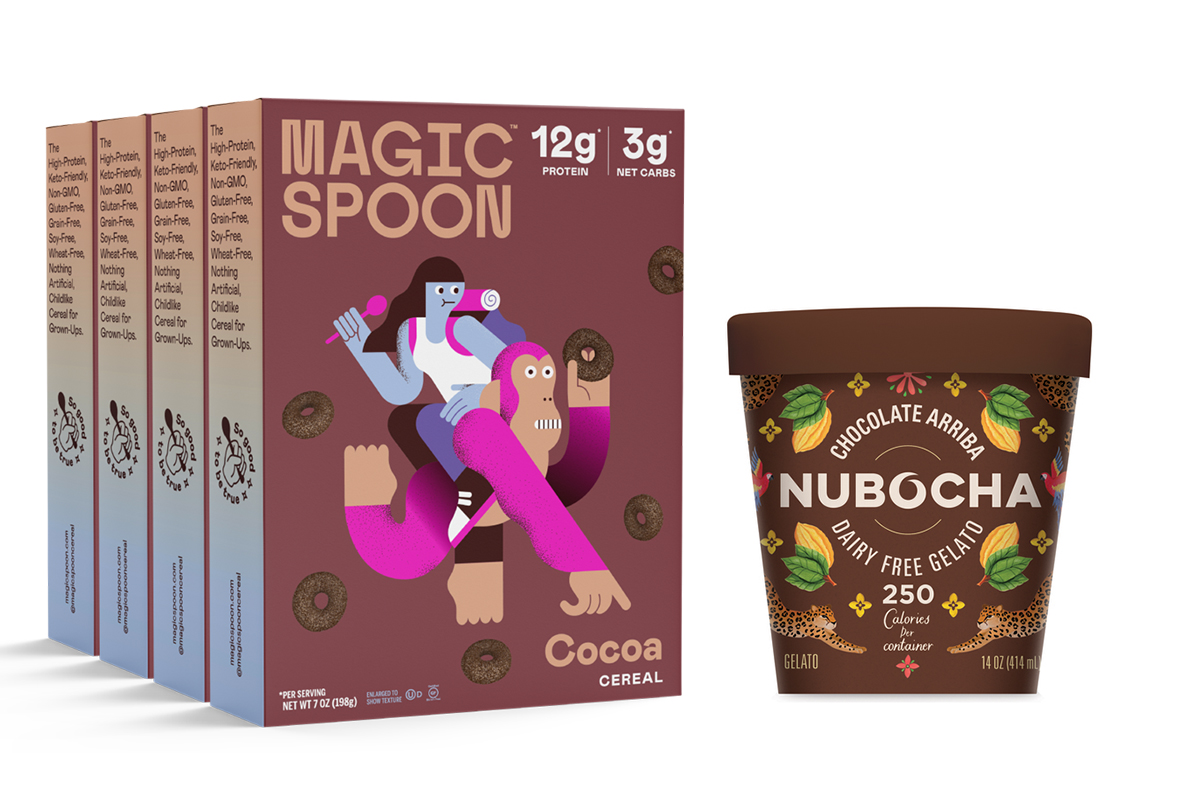 A source of sweetness

As consumers increasingly seek natural sources of sweetness, dates are rising to the occasion as a nutritious, lower-glycemic substitute for cane or beet sugar. Dates are used to sweeten smoothies, nutrition bars, beverages, meat snacks and frozen desserts.

Another sweetener gaining attention in the natural products marketplace is allulose, a rare sugar. Compared to table sugar, allulose has fewer calories than table sugar, produces only negligible increases in blood glucose or insulin levels and does not promote dental decay, according to the Food and Drug Administration. 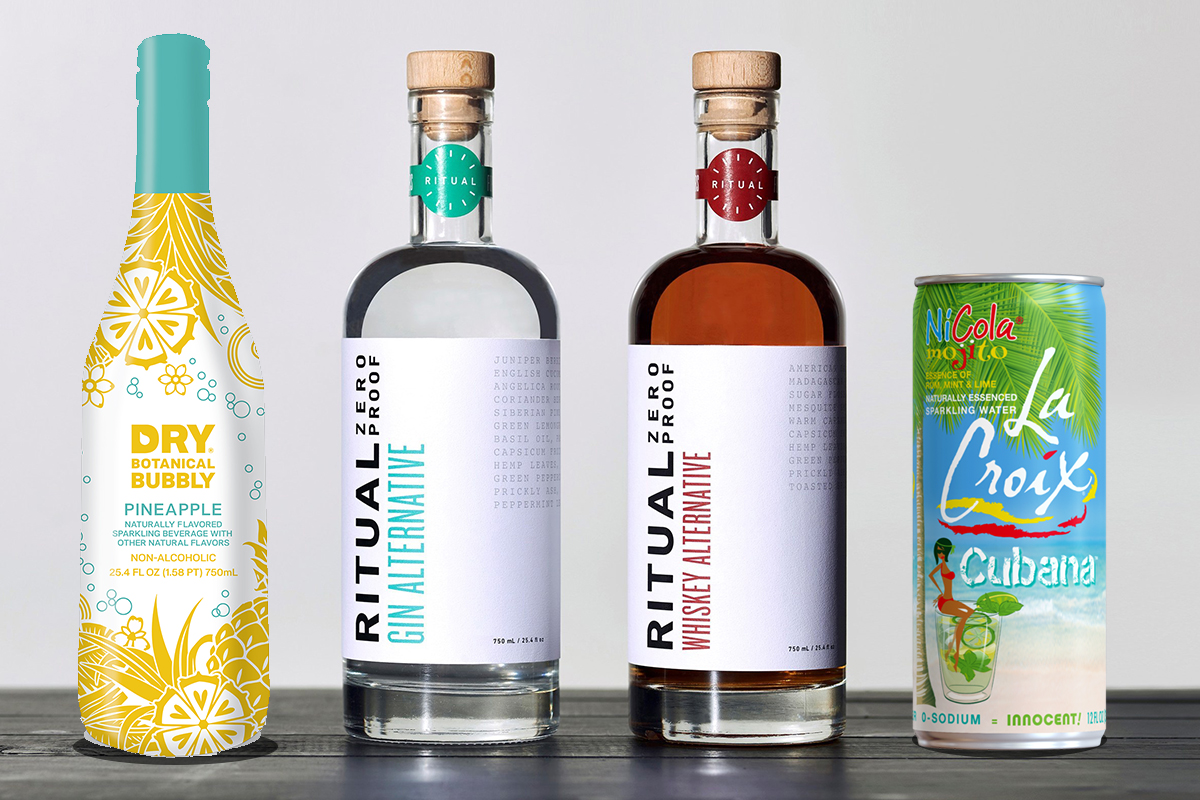 Alternatives to alcohol remain on trend as the so-called “sober-curious” movement gathers steam, particularly among younger generations. Many beverages in this category may capture the essence of classic cocktails and spirits without the booze.

”We’re not trying to replace alcohol,” said Marcus Sakey, who co-founded the company with his wife and best friend. ”Our company is a small group of friends with big spirit collections — we love spirits, but we love choice even more. Ritual is another tool in your cocktail kit. It’s a way to have a grownup drink and still crush tomorrow. We’re all about more: more celebration, more laughter, more life.”

LaCroix Sparkling Water, Fort Lauderdale, Fla., planned to add a mojito-inspired variant with essence of rum, mint and lime. Dry Botanical Bubbly (formerly known as Dry Soda Co.), Seattle, launched as a sophisticated swap for a cocktail or wine and is available in eight flavors, including lavender, ginger, vanilla, fuji apple and cucumber.

“My vision of the future is that when you walk into a bar or restaurant and order a drink, you’re asked whether or not you want alcohol in it,” said Sharelle Klaus, founder and chief executive officer. “And if you’re not drinking, your choice shouldn’t be between just alcohol or traditional soda. We’re filling a void in the category and addressing a huge need for something different with a unique, booze-free beverage that’s in its own class.”