We use cookies to provide you with a better experience. By continuing to browse the site you are agreeing to our use of cookies in accordance with our Cookie Policy.
Home » A possible solution for Salmonella

A possible solution for Salmonella

KANSAS CITY — The Centers for Disease Control and Prevention (CDC), in a Morbidity and Mortality Weekly Report (MMWR), suggested that vaccinating chickens raised for food could help reduce the incidence of Salmonella infections in people. The incidence of some Salmonella serotypes has declined, according to CDC research. Typhimurium moved from the most common serotype from 1996 to 1998 to the third most common in 2019, and Salmonella Heidelberg is no longer in the top 20.

“These decreases might be partly related to the widespread practice of vaccinating chickens against Typhimurium, which shares antigens with Heidelberg,” the CDC said. “This observation, combined with a marked decline in Enteritidis infections in the United Kingdom after implementation of widespread chicken vaccination and improved farm hygiene, suggests that targeting other serotypes through poultry vaccination could be one way to reduce human illnesses in the United States.”

The incidence of infections caused by foodborne pathogens was unchanged for Salmonella along with Listeria and Shigella compared with the previous three years, according to a review of Foodborne Diseases Active Surveillance Network (FoodNet) data for 2019.

Salmonella Enteritidis has been the most-common cause of Salmonella infections at FoodNet sites since 2007, the CDC said, and incidence has not decreased. Chicken was recognized as an important source of infections during the late 1990s, while eggs were the major source of Enteritidis infections in the 1980s.

Given that incidence of Salmonella infections hasn’t declined, what role do vaccinations against the pathogens play in protecting consumers from getting sick?

Vaccines have been identified as a key intervention in a multi-hurdle strategy employed by vertically integrated broiler processors, said Bill Potter, PhD, associate advisor of Poultry Food Safety at Elanco. These hurdles work to keep levels of Salmonella sufficiently low throughout the process so that processors can reduce Salmonella loads to government required standards using facility interventions.

“One of the factors that has led to the increased use of vaccines has been the more stringent requirements from the US Department of Agriculture for lowering Salmonella rates,” Mr. Potter said. “And of course many customers request lower and lower Salmonella incidence in their raw poultry products in order to reduce food safety risks.”

Another factor leading to increased use of vaccinations is the impact of removing antibiotics from meat and poultry production to meet clean label standards. Consumer demand has pressured the industry to develop other methods of reducing pathogen loads on the producer side and make them more effective in concert with reductions in the processing side. When the US demand for antibiotic-free poultry started rising, Mr. Potter said, the poultry industry had to look at other options for preventing and treating pathogen challenges.

“The good thing about Salmonella vaccinations is that they are not in the antibiotic classification,” Mr. Potter said. “Vaccinations of breeders and/or broilers against Salmonella are being used by a significant number of companies marketing products that are sold as ‘no antibiotics.’ So, that’s one of the advantages of using vaccinations to control Salmonella as opposed to other alternatives such as certain food additives that are also known to prevent or reduce enteric bacteria in poultry.” 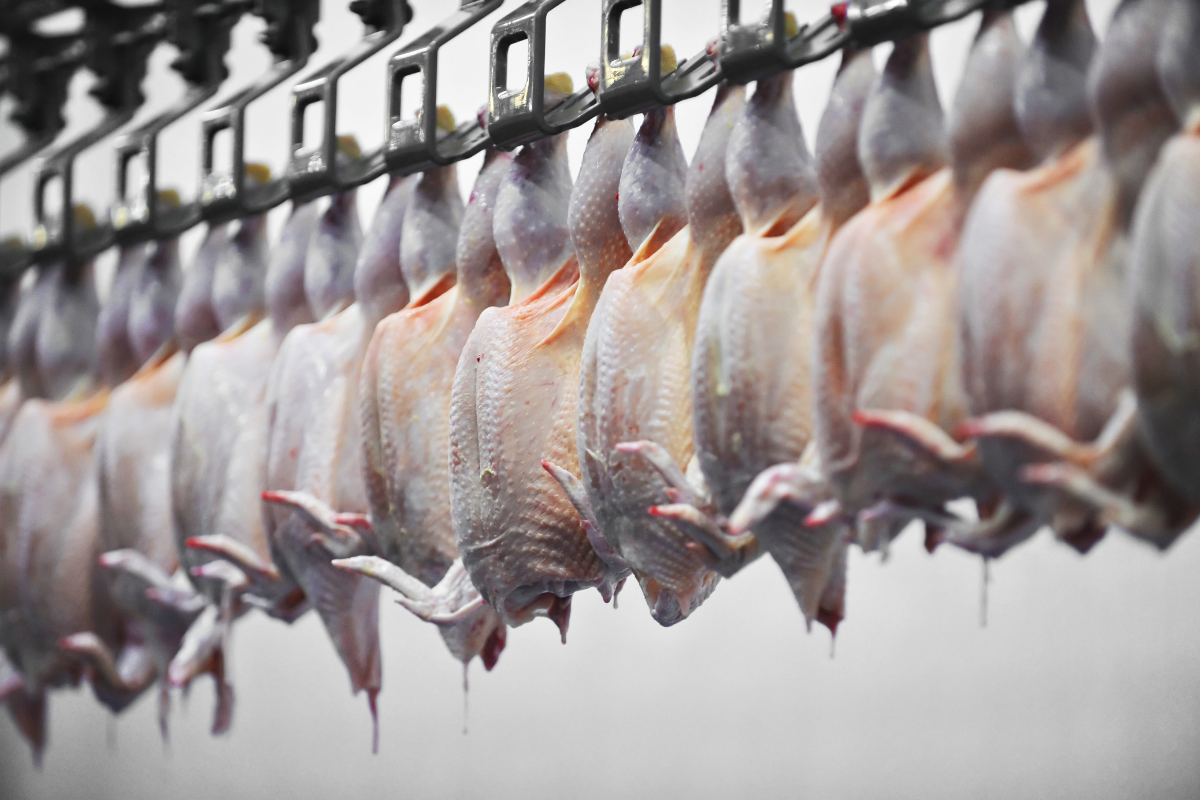 Product mix can play a role in Salmonella load levels at fabrication depending on what happens after the point of the whole carcass being chilled. Whole bird carcasses are very low in Salmonella, but that can change with further processing. More exposure, more equipment and more people handling the carcasses can, in some cases, cause Salmonella load to rebound.

“Salmonella is not necessarily higher all the time in one particular type of poultry part,” Mr. Potter said. “It depends on how it’s being processed and the particular plant’s unique further-processing designs. Typically, a plant, based on their product mix, will have one or two areas that they must focus on more than others and put in more interventions.

“Some plants may have higher counts of Salmonella in their ground products. Other plants may not even have ground products, and they may have more handling for special cutting and fabricating of white meat or dark meat. So, it just depends – it’s not necessarily the same across the board. Plants that purchase raw material from other facilities for deboning or further processing have added challenges of extra handling and time, so their poultry raw materials need the lowest Salmonella loads possible. Salmonella vaccinations can help achieve that goal in poultry plants sending raw materials to further processors.”

What is consistent is the continuous improvement in the reduction of Salmonella loads across the poultry industry, Mr. Potter said.

“We anticipate in the future there will be requirements for continued reduction of Salmonella and other internal pathogens,” he said. “But it will be achieved with a combination of both pre-harvest interventions, such as vaccinations, and continuous improvement of plant processes.

“It is becoming more and more challenging to reduce the loads even more, but vaccines will play a role. Salmonella vaccines have been shown to have a significant impact on reduction of targeted Salmonella serotypes coming to the plant, and therefore, it makes the plant interventions and good hygiene practices more effective.” 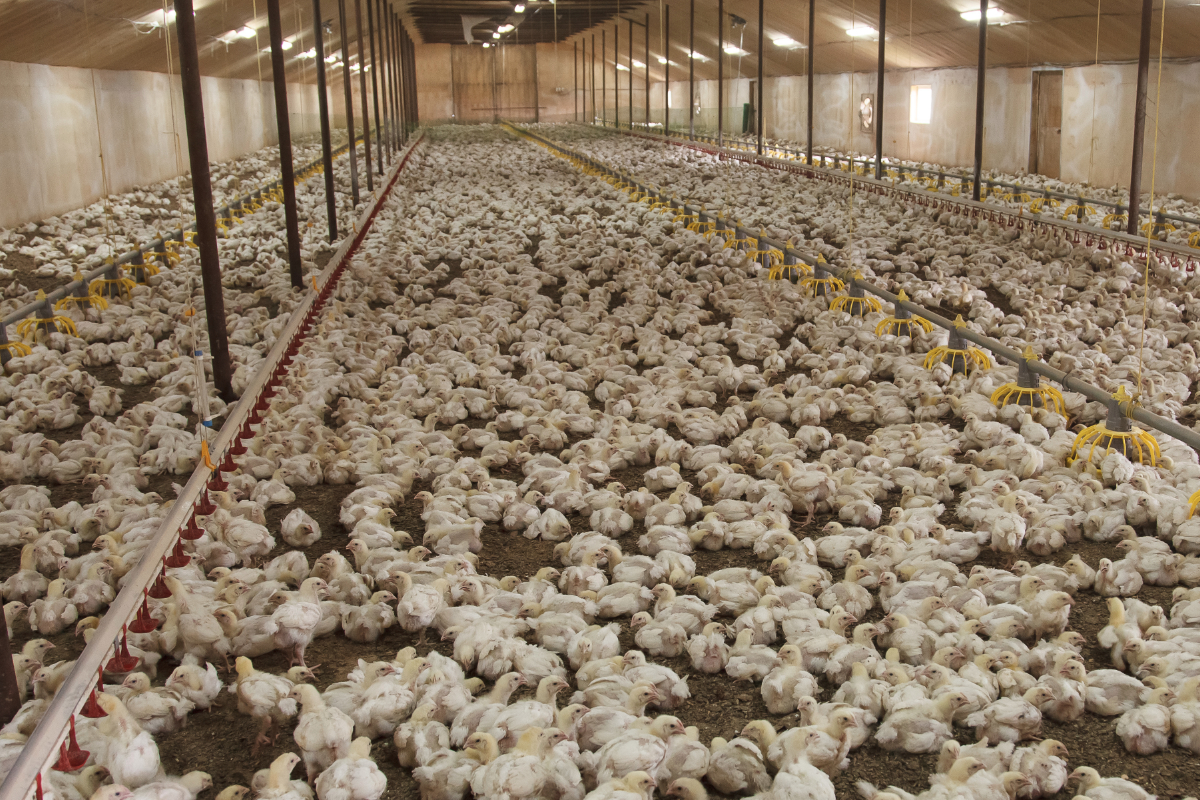 There are specific, commercially available vaccines that focus on serotypes that are attributable to human illness such as Salmonella Enteritidis, Salmonella Typhimurium and Salmonella Heidelberg, Mr. Potter said.

“But now we also have the technology to offer autogenous vaccines further up the chain in the breeder flocks,” he said. “Autogenous vaccines are custom-made for specific poultry complexes to target their most prevalent Salmonella serotype challenges.

Testing the efficacy of Salmonella vaccines is done through controlled studies that are then submitted to regulatory authorities to validate the efficacy of a specific vaccine.

“We can go into a complex or a plant and identify over approximately a one-month period the most common serotypes there,” Mr. Potter said, “and then after the vaccination is applied, we can go back and do another study and ensure that those serotypes have been reduced.”

The goal of a vaccination program should be to reduce the amount of Salmonella coming into processing plants. At Elanco, vaccination starts at the breeders.

“Salmonella vaccines can be administered to breeders, broilers, or both," Mr. Potter said. "Once we know we have Salmonella in control through the breeder stage, then we have to determine if it’s necessary to use vaccinations in the broilers. A lot of times that’s dependent upon multiple factors, mainly how well the plant at that particular complex is able to meet the Salmonella standards of the USDA FSIS and if they’ve had any Salmonella human illness outbreaks or concerns.

Production and maintenance of healthy birds is another angle of the poultry safety picture, and the industry has various options at its disposal. But Mr. Potter said there are vaccines that could use more research. For example, coccidia, which is an intestinal disease caused by a parasite, doesn’t necessarily present a food safety concern but it does widely affect bird health.

“For food safety, in the future there could be increased demand for development of a poultry Campylobacter vaccine or other innovations to control that specific pathogen," Mr. Potter said. "Also, for bird health, increased demand for more development of vaccines to address common poultry challenges, such as the prevention of coccidiosis, could be on the horizon. Also, when a bird health challenge is prevented with vaccines, that in turn may improve the animal’s overall microflora, which can lead to less proliferation of food safety pathogens in many situations.”