We use cookies to provide you with a better experience. By continuing to browse the site you are agreeing to our use of cookies in accordance with our Cookie Policy.
Home » Second stimulus check could boost meat sales

CHICAGO — If Americans receive a second stimulus check from the US government, they would be more likely to spend the money on meat than on other food and beverages, according to a survey released Aug. 11 by Information Resources, Inc., a Chicago-based market research firm.

Although Congress has yet to approve a second stimulus package, IRI in a survey of primary shoppers held from July 31 to Aug. 2 asked them how they would spend a second check. 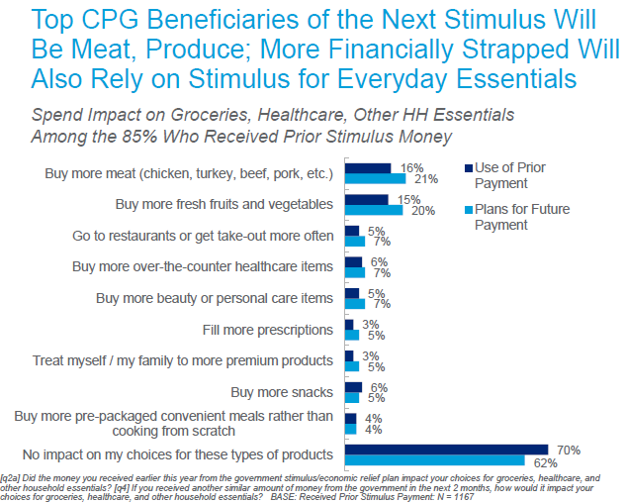 Twenty-one percent said they would buy more meat (chicken, turkey, beef, pork, etc.), which was up from 16% who said they used the first check to buy those items. Other food answers were buy more fresh fruits and vegetables at 20%, up from 15% for the first check, buy more snacks at 5%, down from 6%, and buy more pre-packaged convenient meals rather than cooking from scratch at 4%, which stayed the same. Seven percent said they would use a second check to visit restaurants or get takeout more often, which was up from 5%.

The survey found 27% would use a second stimulus check to buy more groceries and other everyday household essentials, matching the percentage that said they used the first stimulus check to buy the same items. The top answer for the second check was adding the stimulus payment to savings or investment accounts at 42%, up from 35%, which edged out rent, mortgage, taxes or utilities at 41%, which stayed the same.

IRI also asked how the loss of a weekly unemployment benefit of $600 might affect shopping behavior. Among the 1,417 respondents who received unemployment benefits, the top answer was buy less meat at 35%, followed by buy fewer fresh fruits and vegetables at 29%, buy fewer snacks at 27%, buy fewer premium products at 24%, switch more purchases to store brands vs. national brands at 19%, buy fewer pre-packaged convenient meals and cook more from scratch at 18%, rely more on food pantries at 17%, and go to restaurants or get takeout less often at 17%.