We use cookies to provide you with a better experience. By continuing to browse the site you are agreeing to our use of cookies in accordance with our Cookie Policy.
Home » Nestle strives to become more sustainable

ARLINGTON, VA. — Nestle SA has unveiled new commitments and projects in the United States, including the test of electric trucks in Ohio, part of the company’s broader goal to halve its greenhouse gas (GHG) emissions by 2030 and realize net zero by 2050.

Nestle becomes one of the first signatories of the United Nations’ Business Ambition for 1.5°C pledge to share its detailed plan for achieving net zero GHG emissions. As part of its plan, Nestle said it intends to accelerate current initiatives, evolve its operations, and uncover ways to balance remaining emissions through high-quality carbon removal projects or innovation.

“We are striving for a more sustainable future, toward a healthier planet, a stronger society and a thriving economy,” said Steve Presley, chairman and chief executive officer of Nestle USA. “That’s why we are building on our existing work to set ambitious goals that will make a real difference, and why we continue to look for new and innovative ways to achieve them in our market.”

Nestle said it is “reimagining” aspects of its largest market — the United States. Specifically, the company said it is taking a closer look at ingredients, packaging and transportation.

The company has debuted a pilot fleet electrification plan to test the use of electric trucks on a 20-mile short haul route in Ohio. With transportation accounting for 17% of its current US GHG emissions, Nestle said converting fleet transportation to electric vehicles would “significantly” reduce its fossil fuel use and overall carbon emissions, thereby advancing the journey to achieve net zero GHG emissions.

Globally, Nestle expects to complete the transition of its 800 sites in the 187 countries where it operates to 100% renewable electricity within the next five years.

Ingredients are another key part of Nestle’s GHG emissions strategy. Nestle said it is partnering with industry experts and suppliers to reduce the carbon footprint of its most emissions-intensive ingredients: dairy and beef. The company said it recently became the first corporate partner to join the Net Zero Initiative, an industry-wide effort that will play a key role in helping US dairy to make progress toward GHG emissions reductions and significant improvements in water usage from field to farmgate through innovative technologies and practices. 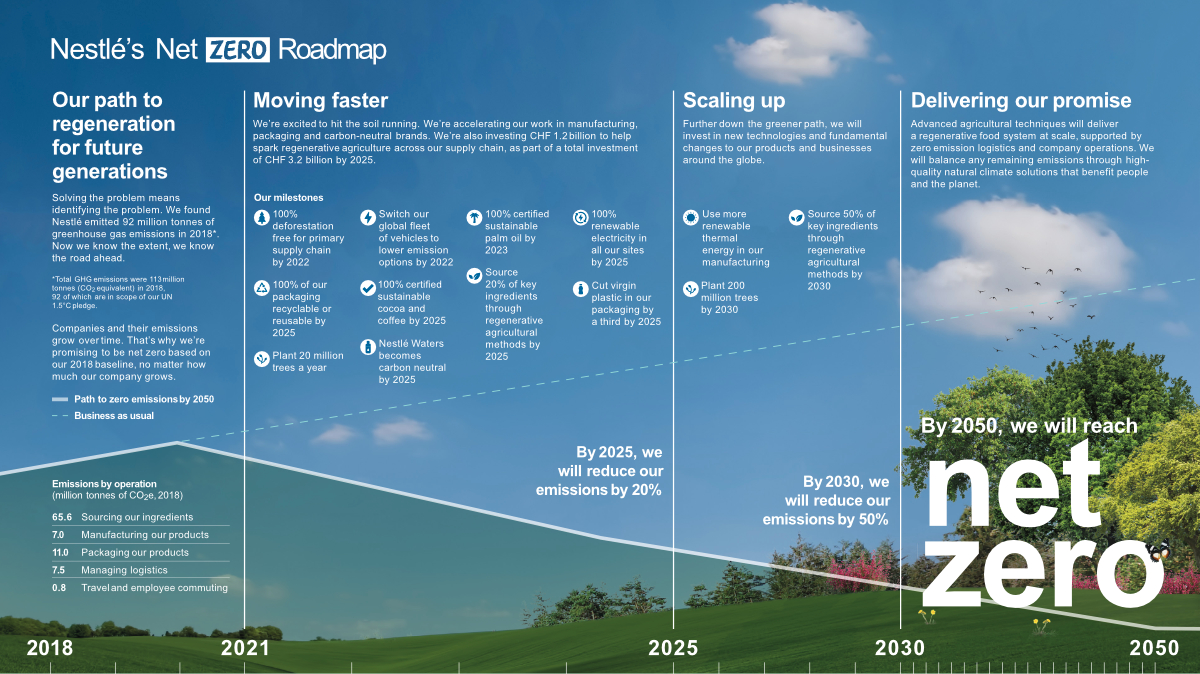 On the packaging front, Nestle said it is inching closer to its goal of 100% reusable/recyclable packaging by 2025. Initiatives underway include the conversion of Nestle USA’s creamer portfolio to fully recyclable bottles by 2022 and the launch of fully recyclable flexible plastic bags for its Nestle Toll House Bite-Sized Chocolate Chip Edible Cookie Dough.

Finally, several of Nestle’s top US brands have announced new commitments to achieve carbon neutrality, including Garden of Life and Sweet Earth Foods, which have committed to achieving the goal by 2022 and 2025, respectively. In addition, several international brands sold in the United States have announced similar commitments, including Perrier, S.Pellegrino and Acqua Panna, which are set to achieve carbon neutrality by 2022. Nestle said it also expects every cup of Nespresso coffee will be carbon neutral by 2022.

“Brands will achieve carbon neutrality by investing in a mix of renewable energy, packaging and operational improvements, and high-quality offset projects,” Nestle said.

News of Nestle’s announcement falls in line with an overall industry shift toward making sustainability a priority, said Ryan Whittaker, consumer analyst at GlobalData, a data and analytics company.

“Nestle’s ambitious plans reveal how pervasive environmental issues have become in the corporate and consumer world,” Mr. Whittaker said. “In fact, GlobalData’s most recent surveys suggest that the COVID-19 pandemic has actually increased the priority of sustainability and ethics in global attitudes, meaning that Nestle’s announcements are going to resonate with an extremely large number of international consumers.

“It is interesting to see that attitudes have most strikingly shifted toward ethics and sustainability in the global south. The pandemic has encouraged consumers everywhere to consider what they are buying and its associated environmental cost.

“Nestle’s statements that its global reach provides it with a unique opportunity to address climate change is true. The company is prepared to pay a $4.34 billion price tag to support regenerative agriculture, reforestation, making more brands carbon-neutral and transitioning to 100% renewable electricity globally by 2025, which is extremely impressive. There’s no doubt that this will resonate well with consumers and regulators all over the world.”

He added that Nestle’s actions provide a glimpse of how future business is going to be approached, with more companies focused on becoming greener, more transparent and ultimately more sustainable.

“Other companies should take note; their plans for the future should prioritize energy from renewable sources, reduce business travel, and tackle waste as key pillars of business practice,” he said. “In the wake of COVID-19, consumers will demand businesses that help to make the world better.”