The chickpea – a prince among pulses

KANSAS CITY — Startup companies continually feature chickpeas in new product launches. Investors have noticed the nutrient-rich ingredients as well, and Whole Foods Market, Austin, Texas, listed them as a top trend for 2021. What makes chickpeas a prince among pulses?

Poorvi Patodia, founder and chief executive officer of Boston-based Biena Snacks, experimented with lentils, beans and other pulses and legumes before deciding on chickpeas for the company’s Roasted Chickpea Snacks and Chickpea Puffs that contain 5 grams of plant protein per serving.

“We consistently come back to the chickpea because it works for the consumer,” she said. “Not only is it nutritious — all of the nutritional properties that consumers are looking for — but I think that (chickpeas) have a distinct advantage in a couple of different areas. From a taste standpoint, they are neutral in taste, and consumers love the taste.”

The neutral taste allows chickpeas to work well with many other flavors.

“They can really take on any flavor that you combine them with,” Ms. Patodia said. “They taste great with savory types of flavors, whether it’s a simple sea salt or whether it’s a more complex flavor like our barbecued flavor that we have with our roasted chickpea line where there’s notes of salty and sweet and smoky.” 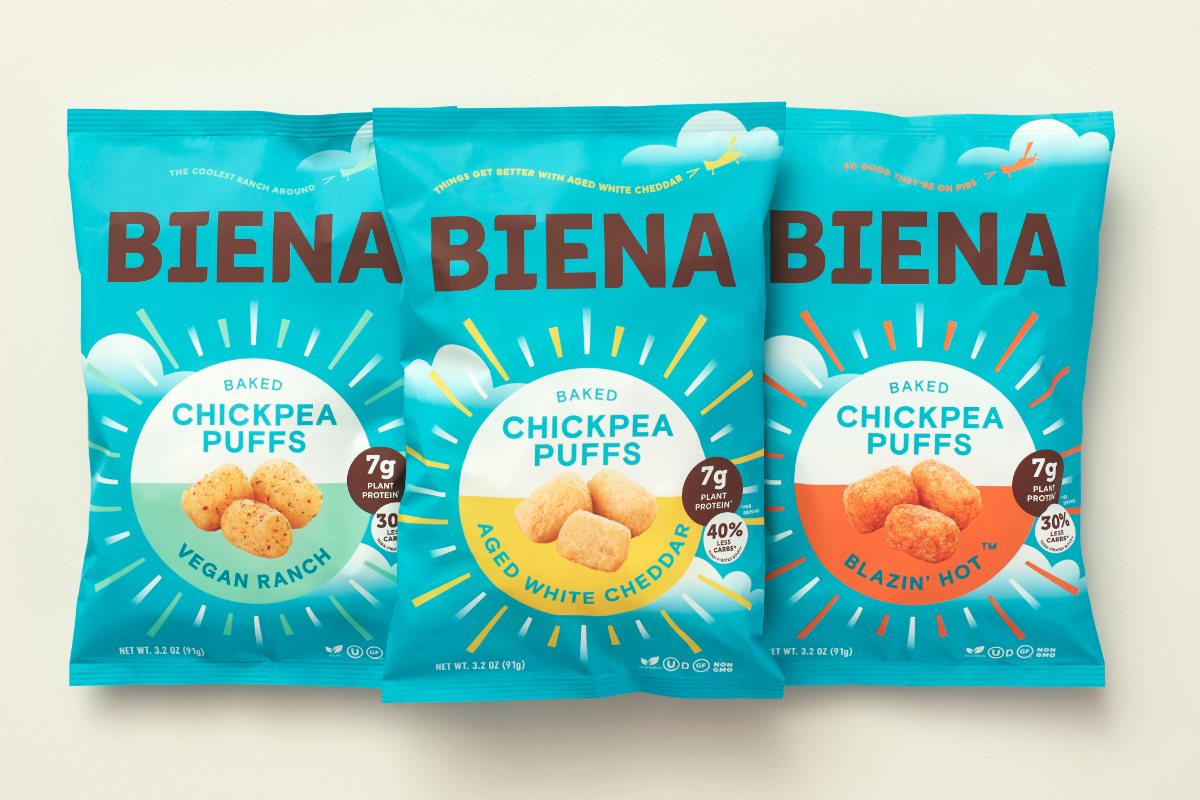 Likewise, chickpeas pair well with sweet flavors such as honey, she said.

The popularity of hummus gives chickpeas another advantage, she said.

“American consumers have become increasingly familiar with chickpeas, and it really started with the growth of the hummus category well over two decades ago,” Ms. Patodia said. “A lot of the brands in the hummus category really focused on not only growing their sales but really educating consumers on the benefits of chickpeas.”

Financial backing has followed. InnovoPro, a developer of plant-based protein ingredients and based in Tel Aviv, Israel, in October reported it has raised $18 million in a funding round led by Jerusalem Venture Partners. Other investors were Icos Capital, iAngels and Rabo Food & Innovation Fund, part of Rabobank’s investment arm.

InnovoPro developed a proprietary extraction process to concentrate protein from the chickpea. The company offers a 70% protein concentrate from chickpeas that has a neutral taste, high functionality and high nutritional value, according to the company.

Food and beverage companies this year have cut back on innovation and reduced their number of stock-keeping units (SKUs) to focus on supply chains and meeting increased demand for specific items from retailers. The number of US product launches with peas as an ingredient so far this year has fallen by 17%.

Whole Foods Market testified to chickpeas’ potential by listing them in its top 10 anticipated food trends for 2021, mentioning that they are appearing in products like chickpea tofu, chickpea flour and chickpea cereal. Chickpeas are the new cauliflower, according to Whole Foods Market.

New York-based Banza features chickpea products in pasta, macaroni and cheese, and rice alternatives, all product categories where cauliflower items are found, too.

Banza in October launched frozen pizza with a chickpea crust that is available at Target, Whole Foods Market, Wegmans and Heinen’s. The pizza also is available online at Amazon.com and EatBanza.com. Varieties are Four Cheese, Roasted Veggie and Margherita, and a build-your-own Plain Crust option. A serving of Banza pizza has 17 grams of protein and 5 grams of fiber, which compares to 13 grams of protein and 3 grams of fiber for a leading cauliflower crust pizza.

Chocolate is the flavor of choice for Antithesis Foods, Ithaca, NY. The company offers Grabanzos, which are chocolate-covered chickpeas. (Garbanzo beans is another name for chickpeas.) Grabanzos contain 4 grams of fiber and 3 grams of plant protein per serving. The color of chickpeas may depend on the variety, said Ashton Yoon, co-founder and chief operating officer of Antithesis Foods. The kabuli variety, which is grown in North America, is tan. The desi, which is found more often in the Middle East, is dark green.

Nutrition and taste were the goals of Margaret and Ian Wishingrad when they sought to create a plant-based cereal full of protein and fiber.

“At the top of the list that would meet this requirement was the chickpea, so we decided to build our first line of cereals around this ingredient,” Ian Wishingrad said.

Three Wishes Cereal comes in the four flavors of cinnamon, honey, cocoa and fruity.  All the varieties have fewer than eight ingredients and contain 8 grams of protein and 3 grams or less of sugar per serving.  Three Wishes refers to the three Wishingrads: Margaret, Ian and their son Ellis, who is referred to as the most important taste-tester.

“It's not hard to tell if he likes something or not,” Margaret Wishingrad said. “So once the products and flavors were good enough for our son, we knew we had a winner.

“We came up with the idea when he was 6 months old. He started trying our prototypes at age 1 but approved the final product at age 2 1/2. Now at age 3 1/2, he’s our QA specialist.”

The nutritional power of pulses

Chickpeas are pulses in that they are dry, edible seeds of plants in the legume family, according to the USA Dry Pea & Lentil Council, Moscow, Idaho. Lentils and dry peas are other examples of pulses. Pulses contain up to 9 grams of protein per half-cup cooked serving, according to the council. They contain soluble and insoluble fiber, potassium, magnesium, zinc, B vitamins, and iron.

Chickpeas specifically have 2 ½ times more iron than chicken and three times more folate per serving than kale, according to the council.

“Chickpeas overall have a lower glycemic index than other starch-containing crops such as wheat, meaning their effect on blood sugar is much more

gradual which prevents blood sugar spikes,” Ms. Yoon said. “The protein in chickpeas is one of the highest quality of all legumes and contains all the essential amino acids except sulfur amino acids. The lipids in chickpeas are various mono and polyunsaturated fats that are essential for cellular function in the human body. Also micronutrients like folate, iron, phosphorous, riboflavin and more are present in chickpeas.”

The nutritional elements of chickpeas vary by growing conditions, Ms. Hall said. In the United States the long dry seasons in the Pacific Northwest and Arizona are beneficial. Antithesis Foods buys its chickpeas from a supplier who sources them from Arizona.

Chickpeas’ combination of taste and nutrition could make them the star of more new product launches in 2021. Biena Snacks recently launched Keto Puffs available at Whole Foods Market and online.

“That’s been in direct response to what we are hearing from our consumers,” Ms. Patodia said. “Consumers increasingly want nutrient-dense snacking options. They want snacks that taste really, really good, but they also want (the snacks) to fill them up.”