NEW YORK — Four years ago, Alessandro Roco observed a wave of watershed moments marking the rising influence of Asian popular culture in the United States. The success of the film “Crazy Rich Asians.” The popularity of Korean skin care, also known as K-Beauty. A smattering of regional Asian restaurant openings in his native New York City.

“I wondered if there was something I could contribute to the conversation,” said Mr. Roco, a Filipino-American. “At the time, I was working at an apparel startup, and our fridges were stocked with LaCroix, as well as other branded and private label sparkling water brands. Our office manager would order the same lemon, lime, grapefruit flavors.”

Then an aspiring entrepreneur with prior stints in nuclear engineering and investment banking, he began developing a line of sparkling waters showcasing Asian fruits such as calamansi lime, lychee and alphonso mango “that for decades have been masked by added sugars.” He debuted the brand Sanzo the following year.

“I founded Sanzo because there was such a stark divide between the clean, natural formulas that you see across the board in mainstream supermarkets and the high-quality, beloved Asian flavors that represent more than half of the world’s population,” Mr. Roco said.

Emerging brands are stretching the boundaries of the $415 billion non-alcoholic beverage market, introducing new flavors and functional benefits to a range of ready-to-drink offerings in recent years. Concepts quenching consumer curiosity include cactus waters, botanical tonics and gut-healthy colas, typically formulated with less sugar than conventional refreshments. And while Coca-Cola, Pepsi and Red Bull remain the top brands, numerous new entrants are pouring into the category, backed by high-profile investors.

In late April, Lemon Perfect, a maker of beverages based on cold-pressed organic lemons, raised $31 million in Series A financing, led by singer, songwriter and actor Beyoncé Knowles-Carter. Functional soda brand Olipop in February raised $30 million in a Series B funding round at a $200 million valuation, with participation from celebrity investors, including the Jonas Brothers and actors Mindy Kaling and Gwyneth Paltrow.

And earlier this year, Sanzo raised $10 million in a Series A financing round that included former Coca-Cola Co. executive Francisco Crespo and actor Simu Liu, who starred in Marvel Studios’ “Shang-Chi and The Legend of The Ten Rings.” The funds will be used to support new retail partnerships and marketing programs and hire additional team members, Mr. Roco said.

Today, Sanzo products may be purchased at Panda Express, Sprouts Farmers Market, Whole Foods Market and select Target stores. The beverages are formulated with fruit and no added sugar, artificial flavors or preservatives. The latest addition to the lineup is yuzu ginger.

“It’s gotten a lot of the big national retailers knocking,” he said.

“Our stated mission is to bridge cultures by connecting people to authentic flavors,” Mr. Roco said. “I believe that Sanzo has the ability to not just sell in New York, LA, San Francisco, but also in the heart of the country. But I also believe there’s a real bridging of cultures happening globally. Seeing Sanzo in Paris and London and Shanghai, Hong Kong, Singapore, Mumbai, eventually… Obviously this will take a long time to build, but that really is my aspiration. I do believe in Sanzo being a global brand.” 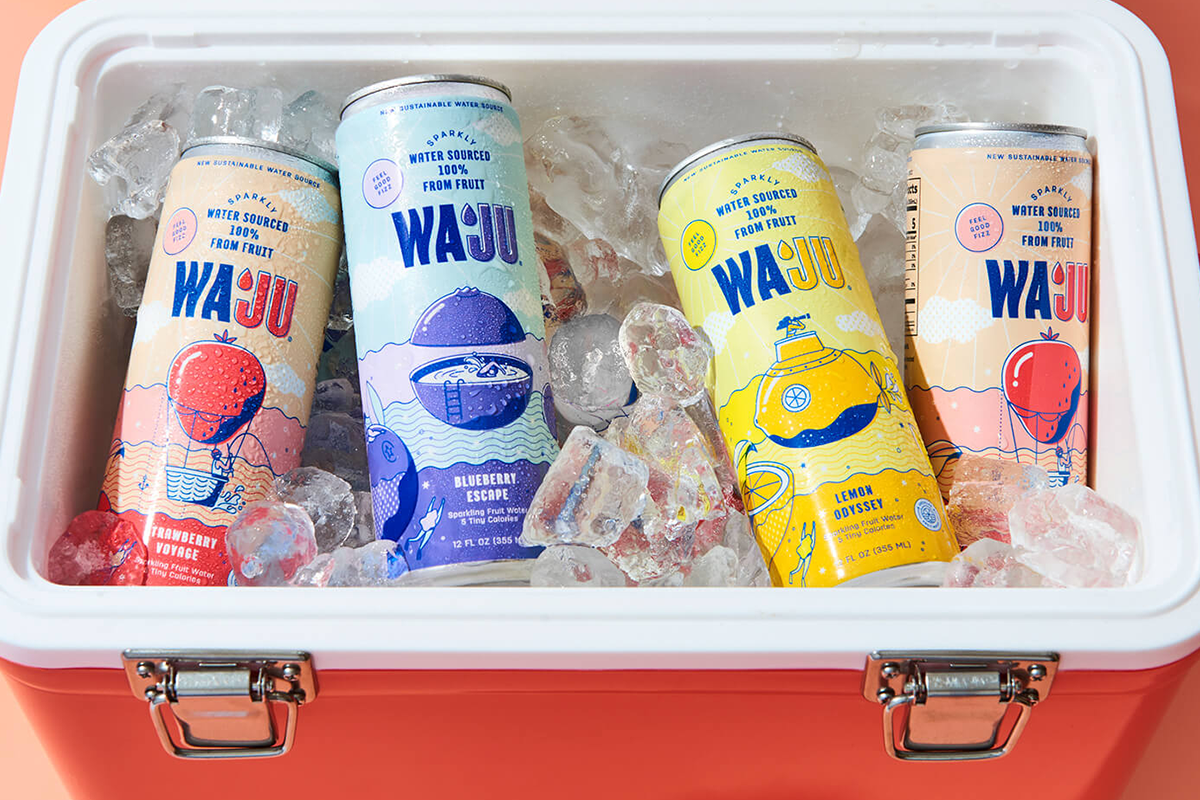 “Every can of Waju consumed is 12 oz of water that’s not coming from a depleted aquifer or over-pumped groundwater resource,” said Mr. Oates, who prior to founding the business held brand management and marketing roles at PepsiCo, Inc. for nearly a decade. “Each consumer that sips our beverages is directly helping address food scarcity, water scarcity and these really significant causes that I believe need to be addressed now for the future of humankind.”

Waju debuted last year online and in recent months rolled out to a handful of independent grocery stores. The beverages contain organic fruit juice and organic amla berry extract, which is rich in polyphenols and antioxidants, and have no added sweeteners. Flavors include lemon, strawberry and blueberry.

“I didn’t want to overcomplicate the positioning of the product by adding combo flavors or weird fruit at the beginning,” Mr. Oates explained. “I wanted to focus on a single fruit people know so it’s approachable and people understand the message.”

The upcycled food movement is gaining momentum. Waju is one of dozens of emerging brands developing food and beverages using traditionally overlooked ingredients or byproducts.

“Upcycling is huge, and we’re an upcycled product, but I think there’s an additional layer on top of that, which is water scarcity,” Mr. Oates said. “We know in the next eight years, 40% of the global population will face a water deficit, meaning they won’t have adequate access to the daily supply of water needed to hydrate and bathe.

“There’s a bigger picture here to inspire solutions to address global water scarcity. We are not going to be the full solve for that, but I think we will make an impact and we will bring awareness to this growing issue that’s going to become even more critical in the years to come.” 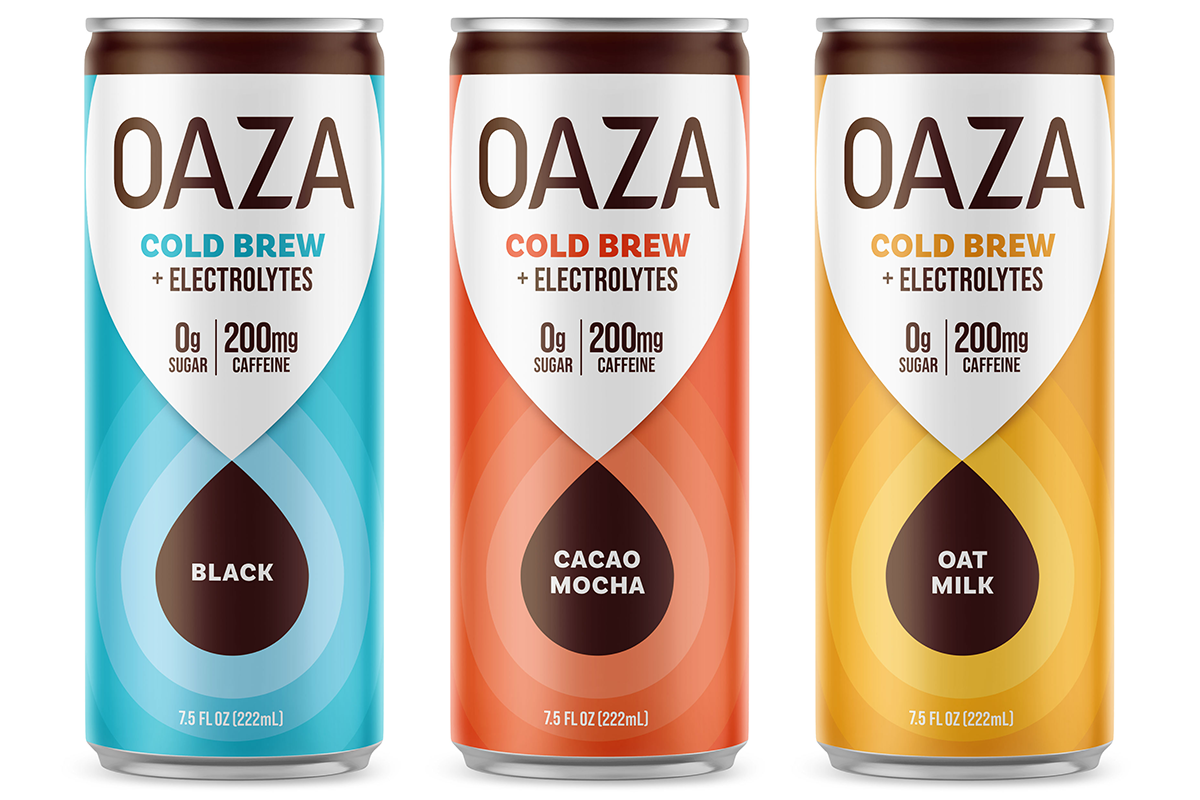 Founder Jeff Burbank initially identified a disconnect between caffeination and hydration in his earlier career as a supply chain consultant. He regularly relied on cold-brew coffee while traveling between New York and Las Vegas every week but still fought fatigue.

“As I was flying out to Las Vegas, spending time in hotels, airplanes and so on, I realized I was just getting dehydrated and coffee wasn’t helping with it,” Mr. Burbank recalled. “That was the inspiration.”

Featuring Colombian dark-roast beans, Oaza delivers twice the caffeine of an average ready-to-drink latte, with a quarter of the calories and no sugar. The beverages boast less acidity than traditional coffees for easier digestion and a smoother taste, according to the company.

“I talked to a lot of sports scientists and nutritionists about hydration and coffee, and I discovered it’s a really interesting topic,” Mr. Burbank said. “Coffee is the least hydrating staple beverage that’s out there. For so long we have had these sports drinks that have electrolytes, and there’s no reason electrolytes couldn’t also help coffee with hydration.”

“The name translates to ‘oasis,’ and it reflects all the things the product is about,” Mr. Burbank said. “It’s refreshing, energizing and healthy.”

Products currently are available in approximately 400 retail locations across the country, including major airports and a train station.

“For us the vision for the product is around being that ready-to-drink boost of energy, essentially being the Red Bull of coffee,” Mr. Burbank said. “We’re introducing powerful ingredients into coffee … and it’s just very well suited for grab-and-go, as an impulse thing.”

Future product launches may include single-serve espresso shots and multi-serve cartons for home coffee routines, Mr. Burbank said. In the year ahead, he plans to expand Oaza’s footprint in grocery and convenience stores and online while reducing costs.

“Supply costs have exploded in the last three or four months,” he said. “This year has been tough because the cost of coffee has almost doubled… While my goal is to be a lower-cost and more affordable coffee, we’re still at the premium $3.99 to $4.49 price point per can as we deal with higher input costs.”