We use cookies to provide you with a better experience. By continuing to browse the site you are agreeing to our use of cookies in accordance with our Cookie Policy.
Home » Ancient grains finding future foothold in North America

“Quinoa and teff definitely have moved from being an imported product to being a domestically grown and sourced item,” said Tom Andringa, head of sales and business development for Western Foods, Woodland, Calif.

Five years ago, almost all quinoa came from South America, he said. Then farmers in Canada and the Northwest Plains of the United States began growing the gluten-free ancient grain that has a high protein content. Today, Western Foods sources some quinoa varieties from Bolivia and Peru, but “the bulk of the quinoa we use is domestic or out of Canada,” Mr. Andringa said.

The increase in supply has brought down the price point for ancient grains, he said.

Quinoa originated among the Incas in Peru and Bolivia. Quinoa farming is better suited for a cooler climate, such as that in the Andes mountains and the Canadian plains. Ardent Mills, Denver, works with growers in Saskatchewan, Manitoba and Alberta through its “Great Plains Quinoa” program.

“Our Great Plains Quinoa program continues to build momentum, largely driven by the supply assurance and predictable pricing that comes from growing in North America,” said Don Trouba, senior director, go-to market for The Annex by Ardent Mills, which sources, processes and markets specialty grains and other plant-based ingredients. “Since the launch of our program in 2017, we’ve continued our efforts by building relationships with universities and breeders, as well as growers, to further develop different varieties and ensure availability of quality products for any application.” 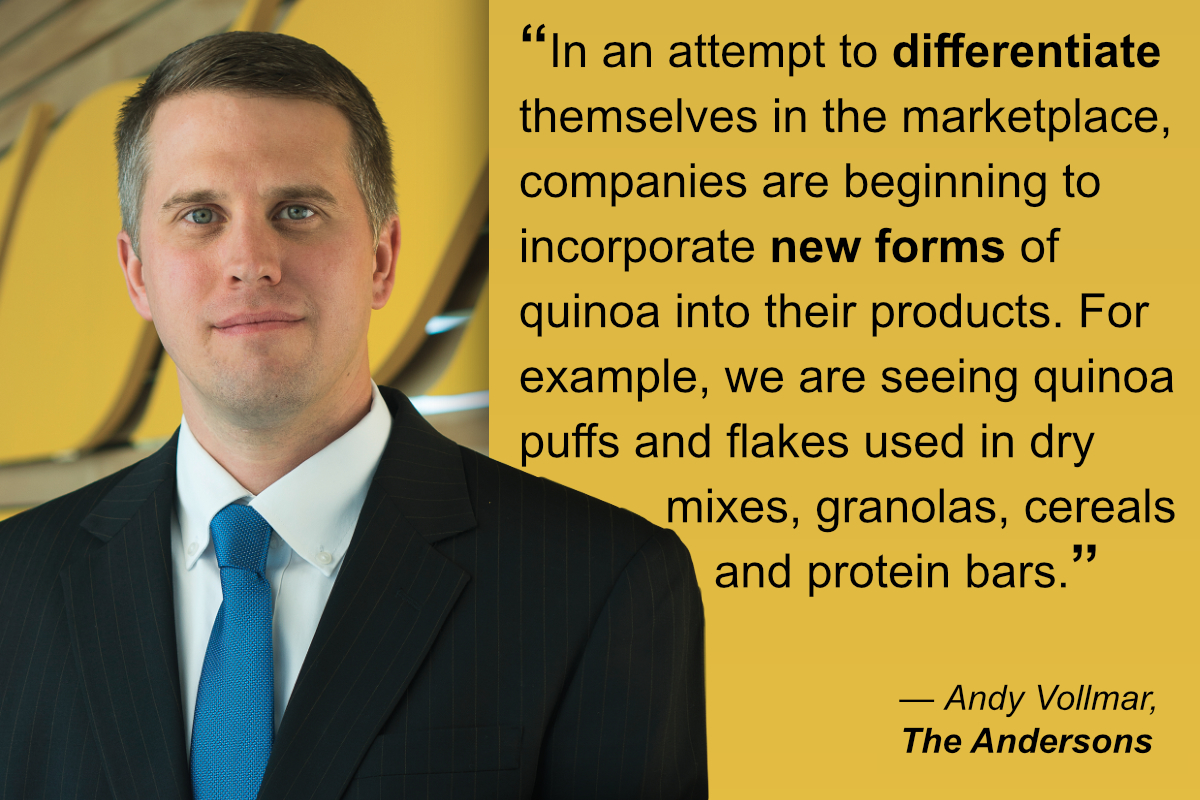 “Items containing quinoa, both whole grain and flour, are now mainstream items for shoppers,” she said.

“In an attempt to differentiate themselves in the marketplace, companies are beginning to incorporate new forms of quinoa into their products,” he said. “For example, we are seeing quinoa puffs and flakes used in dry mixes, granolas, cereals and protein bars.”

Quinoa may be found in a variety of foods from dry and heat-and-eat side dishes to snack crackers, bars, cereals and bread, said Tim Devey, director of marketing for Panhandle Milling, Phoenix.

“Quinoa is getting front-of-pack billing more often, particularly in snack foods,” he said.

Teff is appearing in more snack products like crackers and even in brownie mixes, Mr. Devey said.

Teff, which has a high calcium content, originated in Ethiopia, but Mr. Andringa said Western Foods is sourcing it in the United States, including Nevada.

The University of Nevada, Reno, is testing teff, believing it will grow in the arid climate there and seeking to improve its drought tolerance even more. The high-elevation growing areas around Reno may receive just over 7 inches of rain per year, said John C. Cushman, Ph.D., a professor of biochemistry at the university. 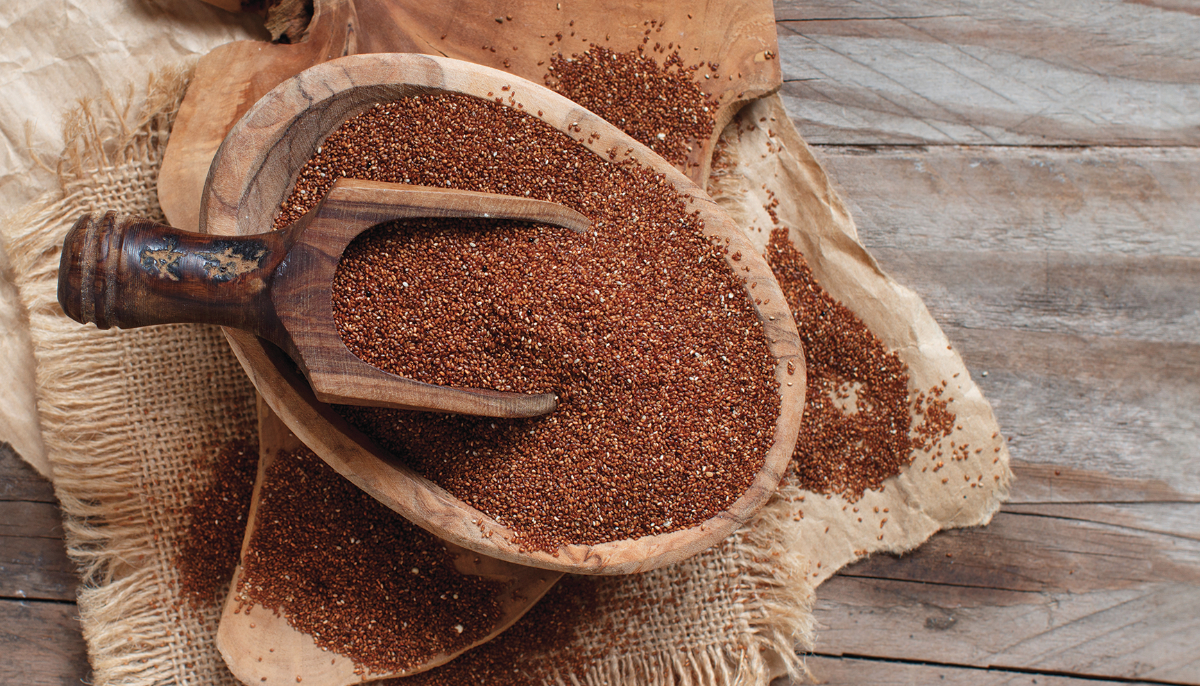 “It’s a dual-purpose crop,” he said of teff. “You get this high-value, nutritional desirable grain (for human consumption), and then you have the grass that can be harvested as forage or fodder, just like alfalfa.”

Teff could be an alternative crop to alfalfa, which does not have the grain for human consumption that teff has, he said.

Through the project, which is supported by the Nevada Agriculture Experiment Station and began in 2015, teff has been grown on as many as 700 acres, Dr. Cushman said.

“Expansion is certainly driven by market forces,” he said. “There continues to be a really high demand for (teff). So I think there’s room for this market to grow and diversify.”

“While all ancient grains have grown in popularity in the past five years and now appeal to a mainstream audience, quinoa has been the shining star,” Mr. Trouba said. “In terms of what’s next, we see both sorghum and millet beginning to proliferate. Both ancient grains are grown domestically and offer supply assurance and cost-effective pricing compared to some of the other ancient grains.”

Mark Stavro, senior director of marketing for Bunge North America, St. Louis, said, “According to The Hartman Group, we’re seeing that amaranth and millet are being adopted by consumers now, and sorghum and teff will follow. We also anticipate a diversified future of ancient grains, from sprouted to puffed to stone ground.”

Bunge offers sorghum masa for tortillas and is working on masa forms of millet and amaranth, he said.

Sorghum is subtle, sweet and mild, a milder flavor than that of quinoa, which can be nutty, said Darci Lamb, in research and development for Western Foods. Western Foods sources more sorghum than any other ancient grain, but quinoa probably is the fastest growing, Mr. Andringa said. 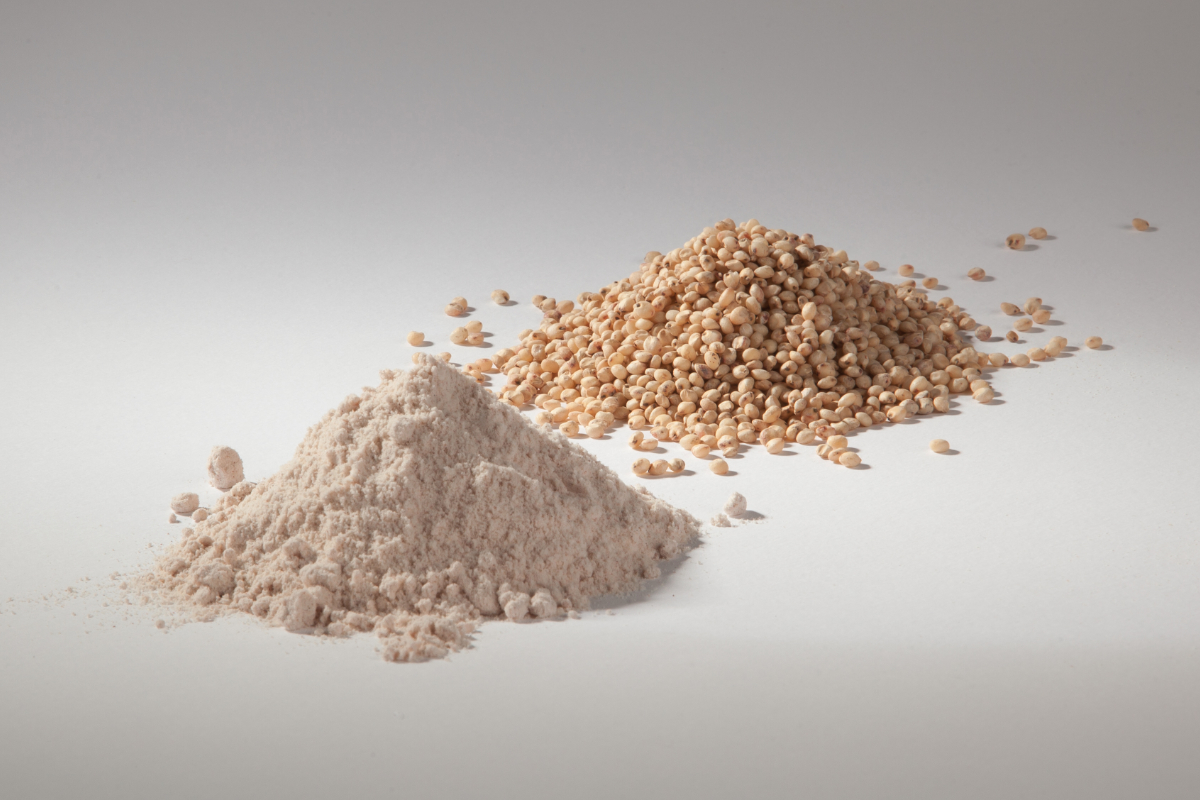 Archer Daniels Midland Co., Chicago, considers sorghum to be an ancient grain because historically it was grown in Africa, and it has remained largely unchanged for several hundred years, said Tess Brensing, research and development and technical product manager.

“It has gained increasing prevalence in the U.S. because of its drought tolerance, agronomic efficiency and use in food, feed and industrial applications,” she said. “The phenotype of sorghum varies dramatically, ranging from short to very tall plants and seed coats spanning white, yellow, red and black. This variety has made it possible to adapt sorghum for specific uses, from brooms to syrup to flour, optimizing the plant characteristics of the application.”

“The variety of colors of sorghum — spanning white, yellow, red and black — translate to differences in flavor and appearance,” Ms. Brensing said. “Because of this, ADM has specifically selected varieties that are very white in appearance and neutral in flavor, which makes it easier to incorporate into a wider variety of products to meet whole grain and multigrain demands.”

Sorghum may work in multigrain blends in bread and is suitable for use in gluten-free crackers and snacks, she said. ADM also offers a range of what the company calls “heritage grains”: quinoa, amaranth, teff, millet, buckwheat, spelt and farro.

“If you take into consideration its health benefits, mild flavor profile and the current trend toward plant-based products, millet is beginning to share the same success as quinoa,” Mr. Reiser said. “As U.S. manufacturers and consumers discover millet’s versatility, applications have expanded to include millet as a component in the form of flour, inclusions and toppings.”

Mintel data show 123 new product introductions in North America with millet as an ingredient in the past 12 months.

“Millet is a great companion grain, rounding out the flavor of ancient grain blends,” Ms. Reiser said. “However, don’t be fooled by its blend-ability. It has the capacity to stand on its own as proven by the popularity of introductions such as millet burgers and millet tots.”

New and newly acquired facilities should assist the milling and baking industry in working with ancient grains.

“The Andersons has been a trusted partner in the food ingredients industry for many years,” he said. “We work with our customers on very specific requests to procure high-quality ingredients directly from the farm and process them into an ingredient form that will perform optimally in a specific application. As the popularity and demand for specialty ingredients like ancient grains has grown, we feel our experience, capabilities and geographic footprint make us an ideal partner for both growers and end users in the industry.”

“Logistically, we needed to be centered in the middle of the country for freight purposes,” Mr. Andringa said.

This year Bay State Milling, Quincy, Mass., began remodeling its Rothwell GrainEssentials Center in Quincy. The center will be expanded to include a collaborative work area designed to support the company’s expansion into varietal development and unique plant-based ingredients. The new space will align people from the product applications, product development, cultivar development, quality assurance and marketing groups. In addition, the remodeled space will include an expanded analytical and rheology lab along with a grain cleaning and milling room. A bake lab to support analytical test baking is part of the expansion.

“Ancient grains deliver diverse flavor profiles and pose functionality challenges for bakers and manufacturers,” said Donna Reiser, marketing communications manager. “To meet those challenges, our trained sensory panel meets regularly to remain calibrated, and our applications team is devoted to on-trend application and formulation development for all of our ancient grains and blends, including gluten-free products.” 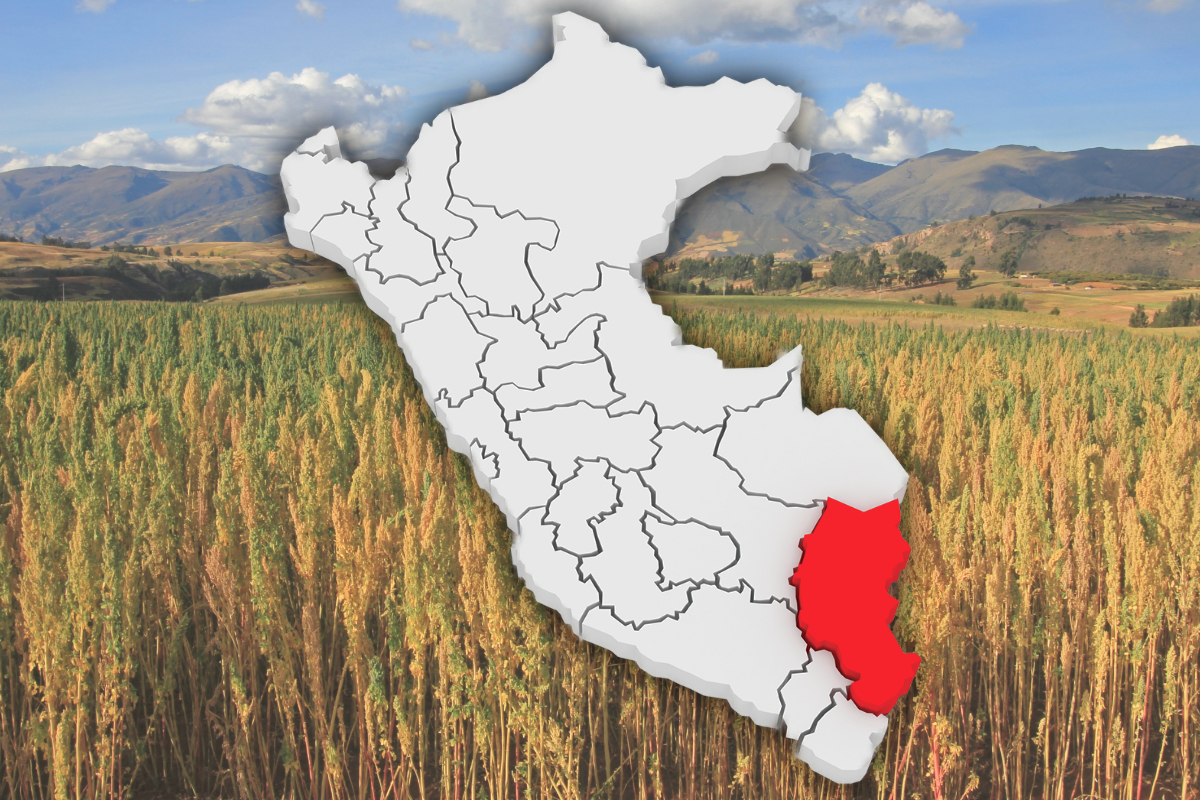 Quinoa farmers in the Andes mountains in 2000 sometimes received less than 25c a lb, according to the report “The quinoa boom goes bust in the Andes” published this year.

Quinoa at the time was “a dirty Indian food that no one wants to eat,” said Emma McDonell, a Ph.D. candidate at Indiana University who wrote the report as part of her doctorial dissertation. “It marks you as racially ‘other.’ Eating it allows you to be discriminated against.” Urban Bolivians called it “chicken scratch” or “comidas de pobres” (food for the poor).

Views on quinoa changed among Peruvians and Bolivians, and prices rose much higher, as demand for the ancient grain once eaten by Incas exploded outside of South America. During a quinoa boom from 2011 to 2014, farmers in the Andes received as much as $4 a lb. They sent children to universities and bought motorcycles, said Ms. McDonell, who has spent 16 months in Peru as part of her project that began in 2014.

Farmers in the coastal areas of Peru noticed the high prices and began producing the crop there. Peru’s total production of quinoa rose to 114,302 tons in 2014 from 44,046 tons in 2013. More pesticides were needed in the coastal areas because of the temperatures and humidity, Ms. McDonell said, and the amount of chemicals on the quinoa grown there caused problems with export markets.

The boom over, farmers in the Andes now receive about 60c per lb of quinoa, Ms. McDonell said. They have tried to develop a brand for quinoa grown in Peru’s Puno region near the Bolivian border. Organic certification is another marketing option, and growers may boast their area of the world first domesticated quinoa about 7,000 years ago.

“They have a good story to tell,” Ms. McDonell said. “It is the ancestral home of quinoa, but it’s not easy to create those collective brands and have them work.”