We use cookies to provide you with a better experience. By continuing to browse the site you are agreeing to our use of cookies in accordance with our Cookie Policy.
Home » Slideshow: Immunity-boosting products on the rise

Slideshow: Immunity-boosting products on the rise

CHICAGO – The financial insecurities Americans encountered after the Sept. 11, 2001, terrorist attacks and the Great Recession that began in 2008 differ from the current situation. That is because we are in the midst of a health and wellness revolution and the current insecurities are the result of a public health crisis.

Many consumers today are more in tune with their bodies and aware of the nutritional and functional attributes food and beverages offer. Today, products formulated to boost immunity are highly sought after.

The products come in many formats, some with a focus on improving gut health, as a healthy digestive system is associated with a strong immune response. Probiotics and prebiotics are associated with improving digestive health. Probiotics are live microorganisms, most often lactic acid bacteria. When consumed, they join the trillions of bacteria that inherently reside in the gastrointestinal system and help create a better-balanced microflora. Probiotics play a role in immune function by preventing the attachment and activity of pathogenic bacteria in the gut. Prebiotics are dietary fibers that function as fuel for probiotics, helping them proliferate.

Lifeway Foods, Morton Grove, Ill., was founded 34 years ago on the purpose of delivering probiotics to the gut through the fermented dairy beverage known as kefir. Lifeway’s kefir contains 12 live and active bacteria recognized with enhancing digestion and boosting the immune system.

“We built our business on gut health,” said Julie Smolyansky, chief executive officer. “Our customers are not just learning about the benefits of probiotics. What they are doing is taking action. Others who have heard about probiotics are now exploring the benefits.”

Lifeway has experienced a surge in sales since the onset of the coronavirus (COVID-19). The company is experiencing record orders and shipments. In markets where the company’s drivers restock refrigerators, they are doing it twice a day. This is about 200 cases of 32-oz bottles of kefir, or 1,200 bottles of kefir selling in one supermarket in one day.

“It’s our quart bottles that are selling,” Ms. Smolyansky said. “Consumers recognize the value and are investing in their health. Kefir is a fermented product, so by design, that fermentation functions as a natural preservative. It has a long shelf life, so consumers are stocking up.”

The demand for product, along with safe social distancing in the manufacturing and distribution environment, has Lifeway working around the clock to fill orders.

“During financial insecure times, people will cut back on luxury items. But kefir is an affordable luxury, and with health on the line, folks are turning to products like ours.” – Julie Smolyansky, Lifeway Foods

“During financial insecure times, people will cut back on luxury items,” Ms. Smolyansky said. “But kefir is an affordable luxury, and with health on the line, folks are turning to products like ours.”

Other immunity boosting products come in the form of foods rich in antioxidants, which help the body fight off damage from free radicals. Free radicals result from oxidation, a natural ongoing bodily process. Anxiety, stress and living in environments with pollution may increase free radical production. Free radicals cause cells to grow and reproduce abnormally, lowering the body’s resistance to fight off danger.

Farmhouse Culture, Chicago, produces brewed, filtered naturally fermented vegetable juice gut shots in varieties such as garlic dill, ginger beet and golden turmeric. The shots are made with savory, wild fermented kraut juice, which means no starter cultures are added. The juices contain the cultures inherent to the cabbage, which is usually a range of lactic acid probiotics. The shots contain no added sugar or dairy. 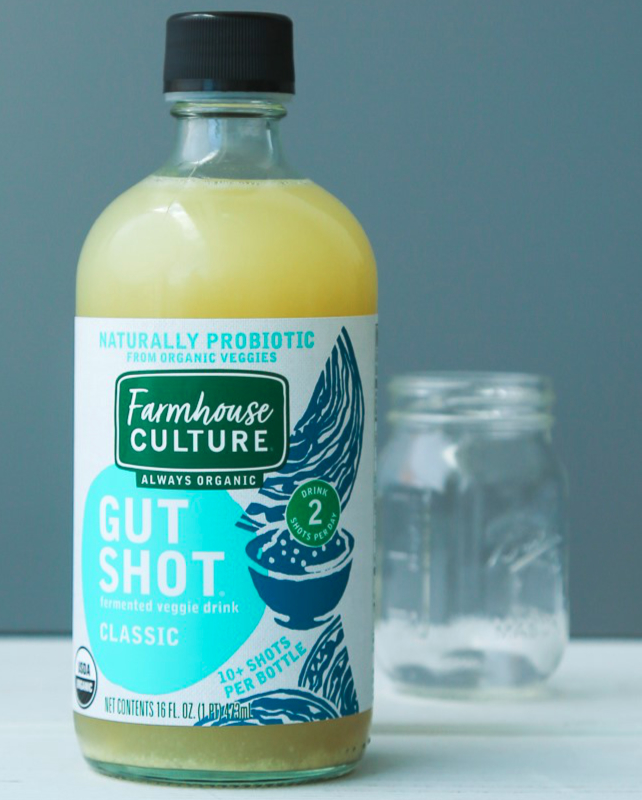 “Gut Shot demand has been booming as consumers seek out products with immunity benefits,” said Brian Evangelista, vice president of marketing. “This month we are launching the 2-oz version of Gut Shot in fresh thyme, New Seasons and Giant. Retailers have been building health and wellness destinations in store, but have been slow in incorporating wellness shots versus traditional supplements. It’s clear that now the shot segment is getting a ton of attention. We are accelerating our e-commerce launch to early May since the demand is evident and the reset windows are uncertain.”

Beta glucans from yeast and fungi also have been shown to support the body’s natural defenses. A March 29, 2020, scientific review published in the Molecular Nutrition and Food Research Journal, explored their mechanism of action as immunomodulators. Studies show they may “train” the body’s immune cells, triggering changes that help fight off pathogens.

The paper highlights the fact that structural differences between different forms of beta glucan may have an impact on their benefits and efficacy. The authors say the balance of evidence points to the immune-enhancing effects of beta glucans from baker’s yeast but expressed the need for further research.

While the Centers for Disease Control and Prevention, Atlanta, focuses on treatments and vaccines for COVID-19, scientists around the world have made immunity support a priority. Mental health also is garnering attention, as COVID-19-related anxiety and stress is taking a toll on the brain.

Ms. Smolyansky said there’s been a great deal of research showing probiotics may do more than improve gut health. They also may indirectly enhance brain function.

Harvard Medical School, Boston, cited research showing that the gut and brain are connected, a partnership called the gut-brain axis. The two are linked through biochemical signaling between the nervous system in the digestive tract, called the enteric nervous system, and the central nervous system, which includes the brain.

The gut has been called a “second brain” because it produces many of the same neurotransmitters as the brain does, said Ms. Smolyansky. The gut plays a role in regulating mood. Thus, a healthy gut supports brain function, and vice versa.

When the brain senses distress, for example, it often sends a warning to the gut, which might cause the stomach to knot up or trigger diarrhea. If the stomach is feeling off balance because of a poor microbiome, this may produce anxiety or even depression.

Some research suggests probiotics may help boost mood and cognitive function and lower stress and anxiety. A study published online Nov. 10, 2016, in Frontiers in Aging Neuroscience, shows Alzheimer’s patients who took milk made with four probiotic bacteria species for 12 weeks scored better on a test to measure cognitive impairment compared with those who drank regular milk. The June 2013 issue of Gastroenterology featured a study that found women who ate yogurt with a mix of probiotics, twice a day for four weeks, were calmer when exposed to images of angry and frightened faces compared with a control group.

While product developers may already have been working on foods and beverages to help boost immunity and improve mental health, it is safe to say that this will be a focus for many companies moving forward. There’s a lot of opportunity, and with that opportunity comes responsibility. Science matters.

“When this is over, people will still be afraid,” Ms. Smolyansky said. “We have an obligation to provide them with nutrient-dense foods that empower them and help them feel they have choices over their wellness.”