MONTREAL — Mid-Day Squares, a millennial-led maker of functional chocolate bars with a cultish, mostly Canadian following, is expanding into the US market this year.

The recipes were developed by Lezlie Karls, who founded the company with her husband, Nick Saltarelli, and her brother, Jake Karls. In the three years since its founding, the leaders of Mid-Day Squares have documented the best and brutally unfiltered moments of the business on social media. A videographer was an early addition to the team to capture what Mr. Karls called “unfiltered entrepreneurship,” including the hijinks and hiccups, mishaps and milestones. Mr. Saltarelli, the company’s chief operating officer, likened the business to a “reality show on Instagram.”

“People want to feel something; they want to be connected to a brand,” said Ms. Karls, the chief executive officer. “That’s what we believe. We believe consumers are tired of being marketed products that are just products. I think what people love about Mid-Day Squares is they feel part of the journey with us, they feel like every time they buy a bar from us, they are helping us succeed and build.”

The products are sold in more than 1,500 stores across Canada and online at middaysquares.com. The team expects to add 600 to 800 US retailers by the end of the year.

“Our goal is to put out epic functional chocolate snacks,” Ms. Karls said. “Right now we’re working on the Mid-Day Squares line, which is our double-layered square product, but we do have other ideas we’re thinking of developing down the road.” 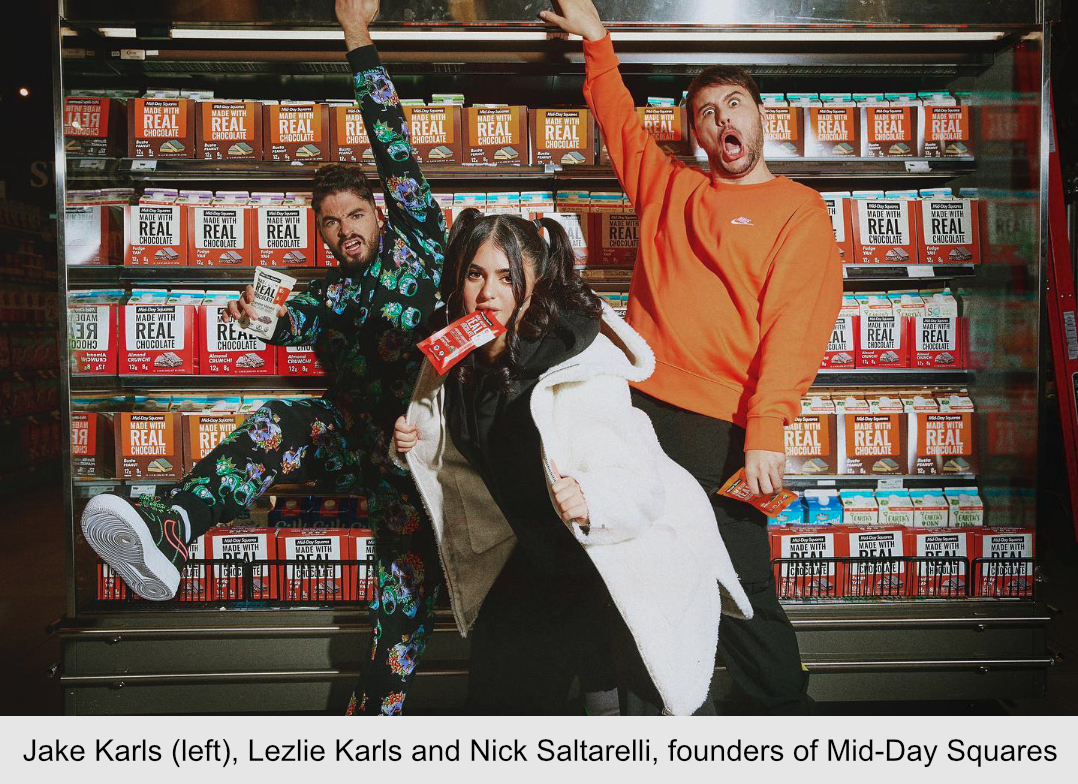 A 30-year-old fashion industry veteran, Ms. Karls created the initial concept for Mid-Day Squares several years ago as a healthier afternoon snack for Mr. Saltarelli, a former software entrepreneur. Previously, the pair decided to partner on a new business venture in food, a mutual interest, and began experimenting with various ideas prior to landing on what Ms. Karls defined as a cleaner take on “your typical Oh Henry! or Kit Kat bar.”

The founders collaborated with McGill University to fine-tune the formulation and nutritional profile for health-minded consumers. A packet of two squares provides 12 grams of protein and 8 grams of fiber. Sacha inchi protein and maca powder are linked to satiety and sustained energy benefits, and pumpkin seeds are a source of omega-3 fatty acids. The refrigerated bars are also vegan, gluten-free and soy-free.

Production began in the couple’s condominium. Ms. Karls and Mr. Saltarelli soon recruited Mr. Karls, who previously launched and marketed an apparel business, to build buzz for Mid-Day Squares. He insisted on an uncensored, unapologetic approach to brand-building, a move that has cultivated a dedicated fan base and contributed to $3.3 million in sales last year.

“They come for the chocolate, but they’re staying for the story,” said Mr. Karls, the chief of customer for Mid-Day Squares. “They’re joining the community and the movement. We realized we’ve got to build this business more like Nike rather than like Kellogg. That was a big game changer on the culture of the business, how we’re executing.”

As demand mounted, the founders planned to partner with co-packers to scale production. Ms. Karls met with more than two dozen third-party manufacturers across Canada, the United States and Europe and encountered a series of rejections.

“No one was able to manufacture the product for multiple reasons,” Ms. Karls said. “One being the ingredients we use, many manufacturers, and co-packers especially, use palm kernel oil. Cocoa butter is a very complex product in terms of how it solidifies at room temperature. There are specific machines you need to have, and basically the double layer was a big problem. Enrobing is a lot easier when you’re enrobing a bar in chocolate than when you have to make two layers.

“Everything about our product is just complex, from supply chain to the type of chocolate, how we make our chocolate. We had a lot of issues, and we realized, ‘Oh wow, we’re going to have to manufacture this thing.’”

Meanwhile, the company was “hemorrhaging money,” Mr. Saltarelli said, adding, “It was super obvious we needed to raise a round.” However, the team faced even more resistance as it began approaching potential investors.

“We had no US proven sales, so almost no one wanted to take our phone call,” Mr. Saltarelli said. “And then no investor likes to invest in a company that owns its manufacturing. I was out there pitching, ‘No, you’re looking at this wrong; this is our biggest competitive advantage… We control the manufacturing plant, which allows us to make differentiated products.’”

The company eventually closed a Series A funding round led by Boulder Food Group and secured a loan from the Canadian government, using the proceeds to build an automated production facility.

“It ended up being the perfect time because we moved into this plant fully built and everything on Feb. 1, 2020,” Ms. Karls said. “We started receiving equipment in May… Us being first-time machine owners having to install the equipment and get engineers in from US and Europe was really challenging. Now we’re in the stages of getting machines running. That’s where we’re at. It’s been a wild run.”

“They come for the chocolate, but they’re staying for the story.” — Jake Karls, Mid-Day Squares

Mid-Day Squares recently raised another $4 million in a Series B funding round, which will help supercharge sales and marketing efforts. In addition to expanding distribution, the company plans to unveil a fourth flavor this year and will likely launch additional product lines in the coming years focusing on “epic functional chocolate snacks,” Ms. Karls said.

“And truly differentiated,” Mr. Saltarelli added. “If we enter a category it’s because we feel we can actually innovate in the category.”

Every step of the way will be shared with the brand’s burgeoning community.

“We focus heavily on storytelling and building a brand with a soul,” Ms. Karls said. “We like to say that our objective is to have our customers at all times feel like they’re buying product from Jake, Nick or I.”