We use cookies to provide you with a better experience. By continuing to browse the site you are agreeing to our use of cookies in accordance with our Cookie Policy.
Skip To Content
Home » Will price parity unlock growth for plant-based meat?

CHICAGO — With prices for plant-based meat alternatives 50% to 300% higher at retail, reaching price parity is key to unlocking the category’s full potential, according to a new report from Kearney.

Three-in-four consumers surveyed by the Chicago-based consulting firm said they are likely to purchase plant-based alternatives in the next year. For the remaining 25%, price and taste were the primary barriers to adoption.

Drawing on research from Jayson Lusk, PhD, an economist at Purdue University, Kearney found a 1% decrease in price could result in a 3% increase in market share for plant-based patties. With this data it estimated that achieving price parity could expand some subcategory market share by up to 20%.

The variable cost to produce alternative protein products has continued to fall as scale and volume increase, and it’s been possible to produce plant-based meat alternatives at conversion cost parity for some time, said Corey Chafin, an associate partner in Kearney’s consumer practice. Some retailers and private label manufacturers offer more affordable products, but for most players in the space, the cost of paying back R&D and marketing expenses is behind higher prices.

“A lot of the companies who were early entrants into the category need to recoup the costs they’ve invested into these platforms to deliver these products,” Mr. Chafin said. “Lowering the price is hard, especially for venture-backed companies.”

Major plant-based industry players may be closer to matching conventional meat prices than many retailers believe, he added. Impossible Foods last year dropped prices by 15% to 20%, while Beyond Meat announced a goal to underprice animal protein in at least one category in the next two years. 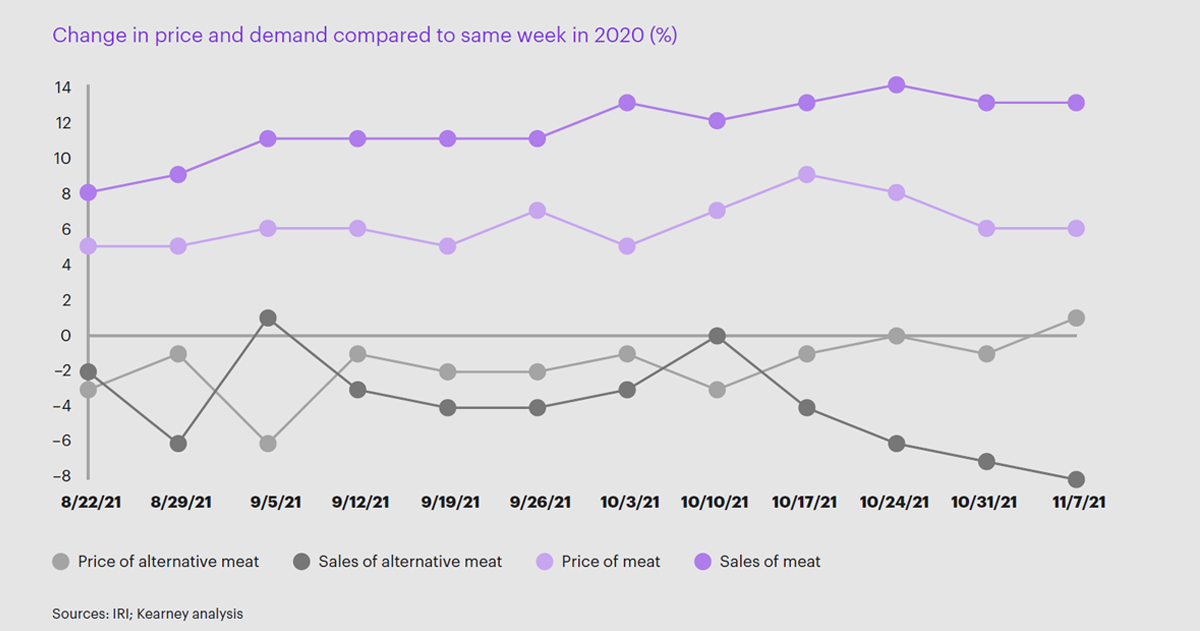 Kearney expects it will take plant-based protein five to seven years to reach price parity at the current rate, but the impact of inflation on animal-sourced protein may accelerate that timeline. While plant-based alternatives have yet to feel inflationary pressures, and in fact are largely cheaper today than they were a year ago, prices for animal meats have increased by more than 10% year-over-year.

“Without any other changes, inflation is bringing the prices closer together,” Mr. Chafin said.

Beyond the price tag

“If you envision the hype cycle for any category, I think we were in a period of peak inflated expectations across the industry,” Mr. Chafin said. “Now, it’s starting to be reset at the baseline. I think the novelty is starting to wear off as folks are trying and buying these products at the shelf.”

Generating trial is easier than generating repeat, which in the case of plant-based meat is slowing down, he added. Mr. Chafin said producers should focus on lowering prices while improving taste, which remains a barrier to adoption for 47% of consumers.

“The most important thing is that after that first purchase, it has to taste good,” Mr. Chafin said. “The headline may be about price parity, but taste is equally important.”