CHICAGO — Slowed in recent years by keto and low-carbohydrate diets, pasta is making a comeback. While (semolina) durum wheat-based spirals, elbows and spaghetti provided comfort to many during the early months of the pandemic, it is newer formulations that are fueling innovation in refrigerated and frozen prepared meals. These are pastas that keto and low-carb dieters can consume due to innovations by processors using alternative grains, legumes, vegetables and even animal proteins to make good-tasting, nutrient-dense pasta, all while adding the trait of being gluten-free, an attribute that continues to attract label-reading consumers. 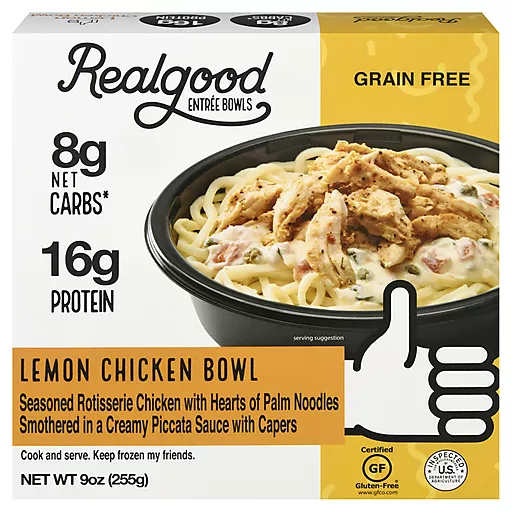 For The Real Good Food Co., Los Angeles, thinly sliced chicken is key to its gluten-free lasagna-style noodles used in the company’s new low-carb, high-protein frozen lasagna bowl. Using a proprietary process, the company combines the chicken with Parmesan cheese, and the mixture is formed, pressed and sliced to resemble lasagna.

“We are all about making food more nutritious by eliminating highly processed flours,” said AJ Stiffelman, chief marketing officer. “By taking carbohydrates and sugars out, we’re working to help address concerns related to a variety of health issues, including diabetes, obesity and overall fitness.”

The company chose to avoid using low-carbohydrate noodles made with multiple ingredients. Instead, the brand relies on a whole food formulation that provides positive nutrition.

The chicken noodles also are used in the brand’s new frozen cannelloni line, with the low-carb, gluten-free “pasta” filled with ricotta cheese. Varieties are marinara, spinach and alfredo.

“With the frozen meal space being one of the fastest-growing retail categories, we wanted to give consumers more choices,” Mr. Stiffelman said. “We explored options for more traditional noodles and, after a lot of trial and error, found that naturally gluten-free hearts-of-palm noodles met our standards.”

The company sources the noodles from overseas and then prepares them in a way to make them a little drier for the lemon chicken bowl. The technique gets them close to resembling traditional semolina pasta.

What makes hearts of palm more appealing than zucchini (zoodles) as a frozen pasta substitute? It’s the fibrous nature of the hearts of palm that binds the inherent 90% water content, making it a more structurally durable noodle than squash. Hearts of palm are harvested from the inner core and growing buds of certain palm trees. They are 100% edible and firm, much like linguini, which is the most common form for them to be cut into and sold as a traditional pasta replacement.

Firmness is a key attribute in pasta. That’s the reason why coarsely ground semolina flour is so popular for making pasta. It comes from a variety of wheat called durum, with the word durum meaning hard, as in durable. Hardness refers to the force to grind it and correlates to protein content. Durum wheat contains about 13% protein, as compared with all-purpose flour, which has a protein content in the 8% to 11% range.

The coarse grind gives semolina pasta a rough texture, which allows sauces to adhere. This is something not possible with some of the original gluten-free noodles made from rice. Rice is also low in protein — about 6% — and void of fiber. Wheat pastas vary in fiber content, but all will contain some, which also contributes to durability.

It’s challenging to create wheat-free, gluten-free noodles that look like traditional pasta. The good news is consumers have become more forgiving, especially when the pasta is used in a prepared dish. Formulators also have become more creative with blending ingredients to produce pasta that appeals to the senses while also delivering nutrition.

Cadence Kitchen, Corona, Calif., known for its flash-frozen prepared entrees, recently entered the gluten-free space with chicken and pasta in a barbecue sauce with cheese. The dish cooks in less than 10 minutes on the stovetop and requires no additional ingredients.

“Knowing that consumer interest in gluten-free items has nearly quadrupled over the last decade, and hearing a desire for more gluten-free options from our own customers, we committed to innovating a pasta recipe that delivers this while still offering unmatched quality when cooked from frozen,” said Alex Klein, president.

The shells are made with red lentil flour, potato starch, tapioca starch, whole egg, egg white and xanthan gum. The eggs contribute protein, and assist with pasta firmness, while the starches and gum bind moisture and prevent breakage, among other functions. 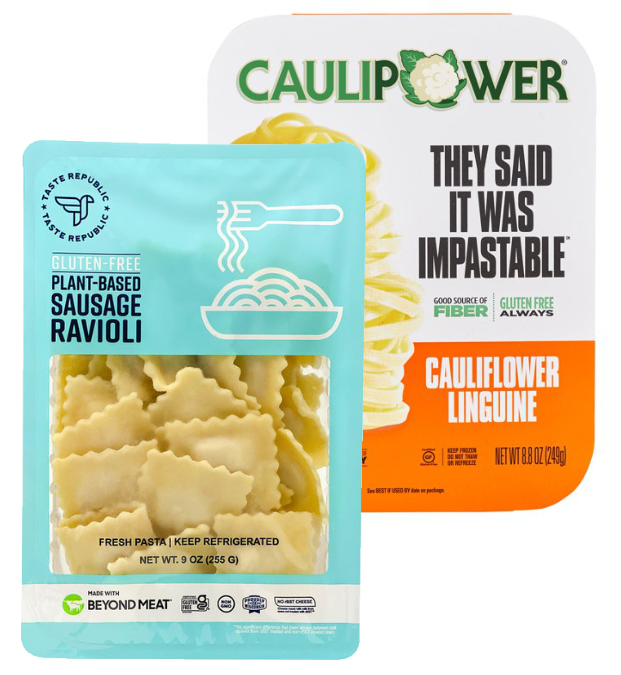 Tribe 9 Foods, Madison, Wis., manufacturers of the Taste Republic brand of gluten-free refrigerated pastas, is rolling out plant-based sausage ravioli featuring Beyond Sausage Italian Crumbles from Beyond Meat, El Segundo, Calif. The caveat here is the product is not vegan, even though it touts the plant-based protein.

“Fresh ravioli that tastes remarkable should be available to everyone,” said Brian Durst, chief executive officer of Tribe 9 Foods. “Beyond Meat has accomplished for meat what we’ve done for pasta: to create an option comparable to its traditional counterparts.”

The ravioli is made with brown rice flour, potato starch, tapioca starch, whole egg, egg white, flax seed and xanthan gum, a formulation similar to the red lentil shells. The brown rice flour contributes a little more protein and fiber than if it came from white rice. It also provides some color. Flax seed is another source of protein, fiber and color, and, when it absorbs water, produces a gelatinous texture that mimics wheat pasta. Because it’s fresh pasta, the ravioli cooks al dente in only two to three minutes.

Fresh pasta, sold refrigerated or frozen, is par-cooked, and this is an important attribute of many of the next-generation gluten-free options on the market. The products are fragile, unlike their durum wheat counterparts. With products like the Taste Republic ravioli, over boiling may cause the product to break down. Drying and selling it in the ambient aisle also will hurt product integrity during boiling.

Earlier this year, Los Angeles-based Caulipower introduced two varieties — linguine and pappardelle — of frozen cauliflower pasta. The gluten-free pasta boasts cauliflower as the first ingredient; however, it also contains a range of other ingredients, including corn flour, potato starch, rice flour, lentil flour, psyllium, citrus fiber, sunflower seed oil, guar gum and xanthan gum to create a desirable texture. The pasta is vegan and does not contain eggs, which are beneficial to product integrity and protein content. A serving contains 5 grams of fiber but 2 grams of incomplete (does not contain all of the essential amino acids in the proportion required by the body) protein.

“It looks, cooks and tastes just like fresh pasta, with fewer calories than any other on the market, fresh, frozen or dry,” said Gail Becker, founder and chief operating officer. “Our mission is to make America’s favorite, delicious comfort foods healthier by using the power of plants.”

When it comes to dry gluten-free pasta, there are fewer ingredients and processes available to formulators and this tends to hinder quality. Many are simple swaps of semolina for legume or another gluten-free flour, mixed with water, then formed and dried. For many consumers, this works, especially if used in recipes with flavorful sauces.

“We’re always listening to shoppers,” said Jean-Pierre Comte, president of Barilla Americas. “Spaghetti is a beloved, sought-after cut, so adding it to our legume offerings was a natural next step. The addition of a long-cut chickpea pasta allows pasta lovers to have more creativity with their meals and recipes with a delicious taste and al dente texture.”

Lupin flour is the key ingredient in JaziLupini from the same-named Rochester, NY-based startup. Founder Jazz Sanchez experimented with various alternative flours before landing on lupin, which is rich in protein and fiber and a good source of many vitamins and minerals. She blends the lupin bean flour with pea protein isolate, tapioca flour and xanthan gum. A serving contains 26 grams of protein, 18 grams of fiber and 3 net carbs.

Lupin is an oddity in the legume world since it is the only bean without starch, meaning it has less sugar than other legumes, which contributes to its keto-friendly positioning.

“JaziLupini will be the first keto pasta option on the market that is versatile enough to work in meal prepping, reheating, baking and freezing, just like real pasta,” Ms. Sanchez said.